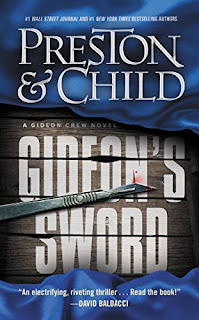 When I finish a book that totally blows me away, I have to either change genres completely or go to reread a very old fave.  This time, I chose to change genres and try a new - to me - series.  And it did the trick!

This was an enjoyable read.  Sort of like the Ilona Andrews book, it  felt like some good junk food to my reading brain.  The story clipped along at a decent pace - the chapters weren't very long which helps a lot, keeps things from dragging.  The plot was intricate enough to keep me interested yet not so complicated that I was stopping to try and figure out things.

The main character, Gideon Crew, is an interesting fellow.  Clever and smart, he reads people really well.  He has a great sense of humour.  And he has a sense of purpose and is just dark and cynical enough to appeal to me.  I liked following along with him on his 'mission'.

There is a small cast of supporting characters that have the potential to increase their interestingness over the coming books. Apparently one of the guys comes one of the writing duo's other series, but I'm not ready to go hunt that down yet.  :)

So, I've found another series to follow when I need some tasty junk-food reading and that's a good thing!
Posted by Evaine at 4:24 PM No comments:

There Before the Chaos by K. B. Wagers 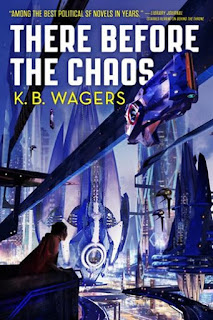 The Farian War - Book One

I am in book hangover.  :)  That's not a bad thing - means I ADORED this book!  In the interests of full discolsure, I won the ARC of the book via a contest on K.B.'s patreon, but that in no way changes how I feel about it.

This is one of those times where I wish I was a good review writer.  Sadly I am not.

When I was 3 chapters in, I already felt like I had met up with a gang of friends I had not seen in a long while and whom I had missed terribly.

Now, there is not be quite as much harum-scarum action as there was in the first trilogy of Hail Bristol's tale, the last five chapters notwithstanding.  This book gives us more of a sharing of Hail herself, who she was, who she wishes to be, and who she really is.  We also learn more of certain important characters, through Hail's eyes of course, and maybe grow to love them as she does.  Well, I did.  :)  I think it's a more personal feeling book, if that makes any sense.

I need more Dailun and Hail in my life too!

There's something going on and despite many hints and answers and discoveries in this book, I still don't know what's going on.  *LOL*  But that's okay.  It's a trilogy and I know I'll get answers before the end, I just have to be patient.  And thanks to the way that K.B. Wagers weaves the story, it's never dissatisfying.

If I have complaints, they're... negligible in the whole scheme of things.  One is that every damned character winks.  Some more often than others, but there are far too many winks going on.  It's K.B.'s tic I think.  I'm sure I've mentioned it before.  The other is the THRICE DAMNED CLIFFHANGER!!!  Thank GOD the format I read - the ARC of the trade paperback - had an excerpt of the next book because I was starting to hyperventilate!  And I must add, the excerpt was FASCINATING!

I cannot believe how long I have to wait for the next book!  I love these books and I love Hail Bristol and her crew of found family, so I will wait.  And try to be patient.  It's not something I'm very good at. 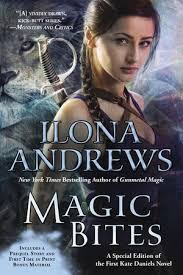 When I was only a few chapters in I felt that the author (or authors because I understand it's a husband and wife team) was trying to be almost paranormal noir?  Is that even a thing?

Anyway, upon finishing, I still had that feeling and that was okay, Didn't mind it at all.  I liken this book to a bowl of chips with some dip.  Really good snack food.  Nothing overly deep but a lot of fun.

I'm not a paranormal fan usually, but with this first installment of Kate Daniels' adventures I found myself quite enjoying the characters. That's a biggie for me.  That's 3/4s of the author's battle right there.  Kate is a bad-ass.  You are never left in doubt of that. I found it very entertaining and not annoying at all.  It can be, but not in this case, or not yet.  And we don't really know alot about Kate even by the end of this first book.  I feel like I've just scratched the surface and it's a very um... misleading surface.

One problem I had with the book is that there are no other female characters of import.  A couple of bad guy girlfriends, a couple of receptionist types, one pack leader but I don't even thing she has a line of dialogue.  I hope there are more in the books to come because if not, I'm going to end up losing interest.  The world created can be populated with important women just as it is with important men.

Speaking of the men.  We meet Curran, the Beast Leader, shapechanger extraordinaire and all things sexy.  So alpha that he's the alpha of alphas.  You know he's destined for Kate.  And that's okay, that's how the trope rolls.  Now for a while, I thought we were being set up for another romance angle with a human doctor - made me think of the Stephanie Plum books and I was worried.  But nope, appears not, so I let out a sigh of relief.  I also don't think Kate is going to go the way of Anita Blake, which is a blessing.

All in all, I think my fave characters were actually Mahon - the Executioner of The Pack and Eddie, young wolf shifter.  I hope we're going to see more of the latter, that's not a given as I read things.  He could fade into the background, but Mahon will be around for a while unless he gets killed off in a coming book which is highly possible.

Anyway, I did enjoy my read and will continue the adventure with Kate and the guys.  I'm told by a few people that the series only gets better as it goes along.
Posted by Evaine at 10:41 PM No comments:

The Gabriel Hounds by Mary Stewart 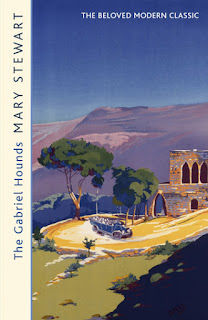 I felt the need to dive back into an old faithful this week, and Mary Stewart was the choice and The Gabriel Hounds the book.

I still love the Mary Stewart mysteries.  Yes, they're somewhat dated, but I'm transported back to the girl in her early teens who gobbled them up like potato chips.

The heroine of this tale, is Christy Mansell and she's really not the nicest of people.  *LOL*  She's 22 years old and oh so world-weary. She's very typically upperclass British just this side of snobby - oh hell, she's actually a moneyed snob, okay?  But she owns it, saving her from being detestable.

The hero is her cousin Charles Mansell - they are the children of identical twin brothers, you see.  He's a few years older and knows just about everything there is to know.  Again, he's that long, lanky, languid British young man that was so popular in the late 60s.

I particularly loved this book because it took place in Lebanon with saluki dogs, ancient palaces, marketplaces and small Arabic villages with small Arabic children.  It was in my Violet Winspear days too, when I first read it, so that primed the pump so to speak.

Anyway, it was a pleasure to dive back into a much-loved book by a much-loved author. (And I must mention my love for the new ebook covers.  They're scrumptious!)
Posted by Evaine at 7:53 PM No comments:

Year One by Nora Roberts 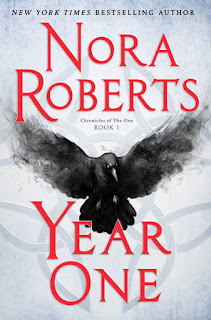 Chronicles of the One - Book 1

I absolutely loved it!  I'd been dying to read it and was thrilled when it finally went on sale last week - for a day.  I cannot justify $15.99 for a book.  Not really.  So I waited.

This book had everything I love about post-apocalyptic type stories.  It had characters that make you want to root for them because while they're good, they're also flawed in some way.  There's magical stuff - fairies and elves and magiks returning to this world.  The main characters are of assorted ages, backgrounds, ethnicities, (Nora still needs to work on her sexualities though).  There's evil that really gives you a chill.  There are friendships, there is some romance, but this is a book about The Doom and what immediately follows.  How life goes on even in the harshest and scariest of times.  And there are dogs.  Damn, I love Nora's dogs.  :)

It was a quick read for me.  I kept picking it up whenever I had a few spare minutes, anxious to see what was going on with my peeps.  And it would make a terrific TV series, I think.  A cross between Colony and The Walking Dead and Into the Badlands.

So, while there is a satisfying ending to this book, it's not the end of the story by a long shot and you expect that.  This is a series of I don't know how many books - Nora's usual trilogy?  I don't know.  I just know I'm anxious to read the next one and if we don't revisit some of what have become my favourite characters, I'm gonna be pissed!  *LOL*
Posted by Evaine at 4:34 PM No comments: