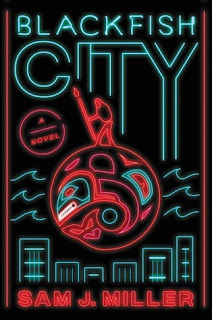 Well, this wasn't for me, I guess.  It got lots of good press and I can understand why, but for my own taste, it didn't satisfy.  (And this is where I remind folks that I rate on my reading experience.)  It was too.... I felt like I was missing something, something that would give me the deeper understanding that the book was trying to give me. And that annoyed me at times.

The premise was interesting, but I felt overwhelmed by all the social stuff I was supposed to be getting riled up about.  There are a lot of interesting concepts in the book having to do with the Earth's future, computer programs taking over so many things, nanosomething or others that sort of enable a melding with animals... just so so much.

The world-building is to be lauded, however.  And the characters were interesting and intriguing. I just... I wish I liked it more.  It felt like I SHOULD like it more.  It's up for a Nebula award this year for best novel and I can see why.  The nomination is deserved, I think.  The book just isn't really for me.  I will say though, it does leave me wondering what happens to the main characters left at the end.  Whether or not their story continues and how it does.
Posted by Evaine at 2:42 PM No comments: 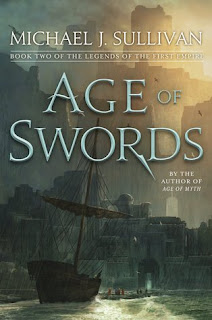 Let me begin by saying that I had no idea we were so far back in the history of this world when I read the first book.  Thinking it was just me, I asked my son who just read book one at Christmas what he thought the 'age' of the world was and turns out it's not just me.  *LOL*

Anyway, after the first quarter of the book being rather slow and um... explanatory?... the tale picked up and I adventured along with the familiar characters I had grown to enjoy from the first book.  And while there were adventures to be had and new locations to be explored, I felt as if this book was very much a setting of the stage for the next book.  Yes, the over-arcing plot lines advance and we get an answer or two or three to some things, but you can just feel that there's a lot more of this story to tell.

I very much enjoy the overall tone and flow of Sullivan's books and he creates characters that I fall in love with, so even though the plot and action of this book might have been a little slow, I still enjoyed it muchly and am looking forward to reading the next book!

Oh, and I have to shout out the cover artist, Marc Simonetti.  The whole series is terrific!
Posted by Evaine at 1:46 PM No comments:

Email ThisBlogThis!Share to TwitterShare to FacebookShare to Pinterest
Labels: Epic, Fantasy, Michael J. Sullivan, The Legends of the First Empire

The Cold Between by Elizabeth Bonesteel 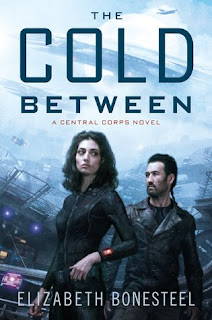 Don't be fooled by the first couple of chapters of this book.  It reads like a steamy romance heading towards erotica land at first.  I was a little confused, but then the mystery kicked in and we were off to the races.  The science fiction wasn't earth-shatteringly different, but it felt mostly familiar to me.

So this is a busy book.  A lot of things happening and often happening quickly - I found myself thinking on more than one occasion that a little streamlining wouldn't be amiss.

There is a thing that authors do sometimes, and that's have something in the backstory of one or all of the main characters that has great import on the characterization, the plot or both that is only hinted at in the inner workings of the characters thoughts.  If it's not done well, it feels like a 'nya-nya-nya, I know something you don't' and I find it quite annoying.  This happens here with Elena and whatever happened between her and her captain six months ago to cause such a rift.  I would rather have known from pretty much the get go because the not-knowing felt rather manipulative.

I enjoyed the characters for the most part, especially the character of Trey.  I loved his speech patterns and thought the author did a terrific job of making him feel 'outside the norm' to the reader.  I also loved that he wasn't a young sprout.  He was definitely sigh-worthy.  There was nothing overly new or different about them, really, but I enjoyed reading about them.  I had a hard time warming up to Elena, the main character, because she just felt a little too... edgily perfect?  There was just some spark missing for me. I have no idea what, but it was there.

Is it a romance?  Nope, I wouldn't consider it so - there's no HEA, nor even a real HFN.  Yeah, there's a romantic element to the story but I wouldn't term it romance.  Space opera mystery works for me. :)

Anyway, it was a fun read for the most part and I'll be adding the second book to my 'watch for a sale' book list.
Posted by Evaine at 7:28 PM No comments: 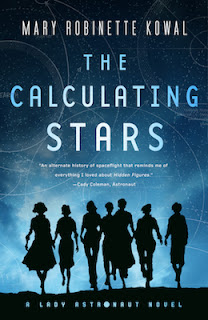 I started this book thinking I was about to read an alternate history about a group of women pioneering space flight on an alternate, historical planet Earth.  What I felt I just read was an autobiography of one of the first women in space.  An AU space, but still... not what I expected.

The story is told from the first person POV of Elma York, who is a mathematician and was a WASP pilot during the war.  World War 2.  She's also married to Nathaniel, who is an engineer and they are both Jewish.  (Although, for some reason - I suspect because of Hidden Figures - I kept thinking of her as black.)  Both of them are very, very smart.  The story begins in alternate 1952 and t the world isn't that much different from reality.

There is an awful lot of Elma becoming more and more aware of racial discrimination against people of colour while being subjected to antisemitism and prejudice against women personally. The latter half of the book is taken up with the beginnings of integration in the International Aerospace Coalition and Elma's learning to deal with her crippling - at times - anxiety as she moves closer to her goal of getting into space.

So, I was somewhat disappointed that I didn't get the story I expected to get when I picked up the book.  BUT, the book was a good read if I look at it as an AU auto-biography.  And because of that, I've added book 2 to the 'want to read' list.

Posted by Evaine at 1:03 PM No comments:

Behind Her Eyes by Sarah Pinborough 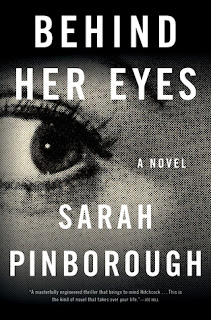 I think this book broke my brain.  *LOL*  I picked it up because it had been recommended to me by a very good friend.  It also had a lot of good buzz about it.

It's a differently structured book.  We get differing first person POVs and flashback scenes/chapters.  It's also written mostly in present tense, I think... At this point, there's so much of that being written that I seldom actually take notice of it.

At any rate, I was luckily able to avoid all the spoilers about the book, only knowing that there was one helluva twist to it.  And I would say that it's really, really important to do that.  I think the book would be pretty much ruined if you were spoiled.

I hemmed and hawed about my rating (between 3.5 and 4) because while I thoroughly enjoyed my read and was pretty much surprised about the main twist (I had suspicions as the end got nearer and nearer), the mechanics of constructing that twist felt just a wee bit deux ex machina to me?  But maybe that was my expectations?

And Netflix is making a limited series from the book, so I suggest you read it before watching. :)