The Circus of the Damned by Cornelia Grey 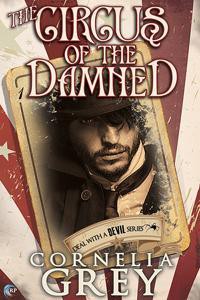 Deal with a Devil Series

Gilbert is a magician. He drinks too much and gets carried away with his powers in a place where he shouldn't and is seen by people who shouldn't be seeing him.

To save his ass, Gilbert joins the circus, even though the ringmaster, Jesse, tells him that it's a lifetime deal.

"If you never believe anything again in your life, believe this: if you join, you will remain with the circus until the day you die, and beyond that . . .Your soul will be damned for all eternity. There is no way out."


Gilbert, of course, is certain that he'll be able to find a way to wriggle out of the deal, but he doesn't count on coming to like the so-called 'freaks' that make up the circus, nor does he count on falling for Jesse. And, nobody realises the danger that the circus is now in, thanks to Gilbert's original bad judgement. Then there's that pesky deal thing with the devil, Farfarello.

There were a couple of things that gave me a bit of a pause. First off, I really have no idea why Gilbert ended up falling so hard for Jesse. I suppose the why isn't that important in the long run, but I like to think that it was for more reasons than that he was pretty and good in bed. :) Also, at first Jesse came across as a bit forbidding and a bit wicked, but soon after he became gentle and sweet for the most part. It was a tad jarring for me.

But that being said, I enjoy the way Cornelia writes and ultimately, the characters were quite likable, even the somewhat creepy ones - I'm looking at you Humphreys! I enjoyed the plot of the circus and why it was in existance and even though I felt that the story behind Count Reubens needed more fleshing out, it served its purpose in the end. The love story and intimate scenes were hot, sexy and romantic, especially the one where Gilbert uses his magic... Lawzy me! *fans*

EDIT: I should say that this book has one of the best book covers EVER! Bravo to the artist Kanaxa for her terrific work!