The Love Song of Sawyer Bell by Avon Gale 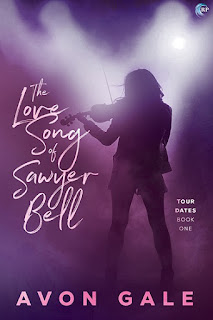 Sadly, I'm disappointed again.  I saw a couple of good comments about this book and in reading the blurb it seemed to have some of the things I love.  Rock bands, musicians, song writers, a pair of heroines who didn't sound like angsty belly-button watchers. Maybe I had found that very rare things for me, a good f/f romance.  I should have known it was too good to be true.  Seriously, these books are not meant for me and I will learn to spot them at some point.

The first 3rd of the book was fine.  Yes, the girls were younger than I'd been hoping - 21 and 25 years of age - but they seemed to have a good grasp of things - like life.  *LOL*   They weren't vapid, they made sense, they had dreams and they had flaws and quirks.  They were real, fully formed people and I was hopeful.

Then they got together.  And I was in the dreaded NA territory.  See, there's a difference between a book/romance with young protagonists and one that's New Adult.  The girls began to feel for each other and at the same time they began to focus on their own 'perceived' flaws which made them begin to hide things from each other and avoid talking about things that might edge too close to those feelings of less-than-worthiness. And there was so much over and over accusing of one wanting 'dick' because she was bisexual and the other gal didn't do guys... I don't know, it just seemed that if they'd stop being so sensitive and prickly and actually talked to each other a lot of these hurts could have been avoided.  And this basically went on until just about the end when they finally got their shit together - mostly because of come-to-Jesus talks with one of the other members of the band - a man.  An older man (maybe 30-ish?).  It all felt less than empowering to me.

I had other, smaller problems too.  Yay for diversity!  I'm all for that.  But really, do we need to have the labels of almost every character in the book proclaimed? Does it matter to the story of Sawyer and Vix if this one is gay, that one a lesbian, those 3 bisexuals, and that one over there straight... and so on?  I don't think so.  The diversity felt forced, not natural and I think that's because it was being pointed out over and over again.

Another problem I had was the 'ew, boys' stuff.  Boys aren't always disgusting, unfeeling, shallow sots... well not all the time anyway.  *LOL*  That felt kind of juvenile to me.  But what do I know, maybe young lesbians all talk this way?  (And then the author totally dissed Nickleback, which did not endear her to me because I really like Nickleback!)  Another small thing... is it a new young girl uniform to wear tank tops... all the time tank tops.  Day in and day out?

So once again, caveat being given... I'm not the best person for NA romances.  They annoy me and I have no patience for these angsty kids.  The book was well written and would probably be loved by someone who gets NA.  I'm not her. So the hunt continues for some enjoyable (for me) f/f romances.