Lord of the White Hell (Book 1) by Ginn Hale 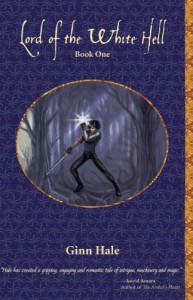 This is another book that I've had in the TBR pile for a while. What caught my attention first was the blurb:

Kiram Kir-Zaki may be considered a mechanist prodigy among his own people, but when he becomes the first Haldiim ever admitted to the prestigious Sagrada Academy, he is thrown into a world where power, superstition and swordplay outweigh even the most scholarly of achievements.

But when the intimidation from his Cadeleonian classmates turns bloody, Kiram unexpectedly finds himself befriended by Javier Tornesal, the leader of a group of cardsharps, duelists and lotharios who call themselves Hellions.

However Javier is a dangerous friend to have. Wielder of the White Hell and sole heir of a Dukedom, he is surrounded by rumors of forbidden seductions, murder and damnation. His enemies are many and any one of his secrets could not only end his life but Kiram's as well.

To be honest it was the second paragraph that caught me. Then, I saw a couple of positive recs for the author as a good fantasy author, so I picked it up. It really didn't register with me that it was probably considered a YA fantasy, which is a good thing because I tend to stay far, far away from YA books in general, reading only the rare fantasy novel in the genre. And that would have been sad because I ended up really enjoying the book, the world the author created and her wonderful characters.

I like the author's voice. I like the world she created and the people she populated it with and the story she's telling is intriguing. What is the white hell really? What is the malevolent force that's cursing Javier's family? What's really going on in the depths of Javier's cousin, Fedeles? How can Kiram help? How will his gift with mechanical things help? Lots and lots of questions, none of which were really answered in this book.

That's the only bad thing. This book is basically about setting up the story, meeting and getting to know two young men and their circle of friends and teachers. Establishing some kind of relationship between them and well... that's it. The cliffhanger is HORRID! I hate them at the best of times if I'm honest, but this one... Yes, it's the perfect end for Book One... but Book Two should be in the same damned book! It is an incredibly frustrateing ending - especially for someone like me who is trying to budget her reading $ and time/schedule. Had the cliffhanger been less... um... totally cliffhangerish, I would have given this one at least 4.5 stars if not 5.

But that being said, I will definitely pick up Book 2 and unless it's totally awful, will pick up other books by Ginn Hale.