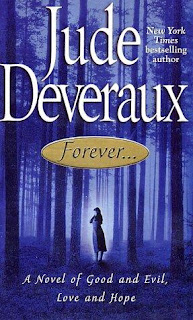 It wasn't as good as I was hoping it would be.

I love Jude Deveraux's early books. Her "Highland Velvet" is my absolute favorite romance novel. But I have to think that ever since she began to venture into time-travel romance and paranormal romance, her quality has dropped off.

I just didn't find her characters as likeable as they used to be. And the plot deserved to be thicker and juicier.

I was just disappointed.
Posted by Evaine at 1:04 PM No comments: 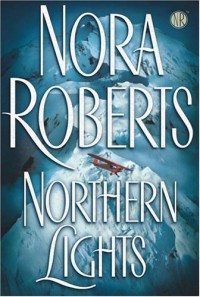 This was Nate's book, not Meg's, and man, was that ever cool.

One of Nora's biggest strengths is her wonderfully flawed, quirky, sexy, fully-fleshed out male characters; and with Northern Lights she finally gave the man a starring role.

Depressed and broken Nate arrives in Alaska and finds a reason, a multitude of reasons, to not give up. That's the gist of it, in a nutshell. But Nora does it in such a way that it's an incredibly entertaining read. This book wasn't so much about the romance and the hot sex - yes, there was some, but it was by no means the focal point of the story. Nor was the growing relationship between Nate and Meg. It was the story of Nate making himself a place.

Going from 'Outsider' to belonging and becoming more or less at peace with his past. Some of my favorite scenes were Nate interacting with his deputies, Otto and Peter, and his office manager/dispatcher/aide-de-camp, Peach. How they all came to like and respect one another despite suspicions and events getting in the way.

Other favorite scenes included Nate constantly butting heads with the natives and long-time residents of Lunacy as he spends his first long night of winter as the town's police chief. Wonderfully colourful and endearing characters, a beautiful setting, a mystery that kept me wondering until the very end; Northern Lights was a juicy and fun read and left me with a big smile on my face.

Yeah, Nate and Meg got their happily ever after, but the more satisfying end was that Nate allowed himself to heal and make a new and better place for himself.
Posted by Evaine at 12:58 PM No comments:

Valley of Silence by Nora Roberts 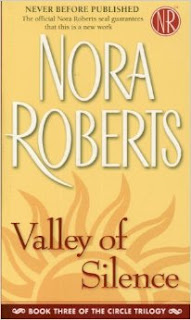 I think the second half of this book was my most favorite part of the whole trilogy. And that was, for the most part, because of Cian, the vampiric hero. 'Cause Moira? The heroine? Wasn't too terribly fond of her. I never, throughout the whole trilogy warmed up to her character.

Cian, however, came alive for me (no pun intended) during the latter half of Valley of Silence. He was not my favorite male lead in the trilogy, that title would have to go to Larkin, the hero of book 2, but beneath Cian's tough and bland exterior lurked a little boy lost that just made me take him to heart. Was it a satisfying culmination to the trilogy? Yes.

The final battle scene was much better, much more fulfilling than I expected to get from a romance novel. Everyone got their comeuppance as they should have and the romance and the 'happily ever afters' were just as I wanted them to be.

Was this my favorite of Nora's trilogies? No, it wasn't. But I did thoroughly enjoy the hell out of it. I think the reason it isn't my favorite is that the plot was so thick, so intricate; there were so many secondary characters to get to know; so much that had to happen to get the six of the Circle to the final battle, that their characterizations may have suffered. And it's the characters I love best about Nora's books.
Posted by Evaine at 12:53 PM No comments: