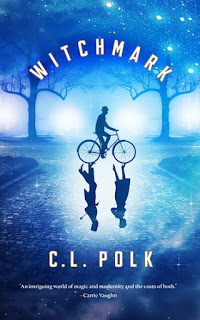 The Kingston Cycle - Book One

I'm going to be frank.  A big reason I bought this book is because the online advertisements for it that featured the cover were so darned clever! If you haven't seen them, the two figures reflected from the bicycle wheels actually walked!  I tried to find a link, but was unsuccessful.  Anyway, that's one of the reasons.  Other reasons include recs by authors I like and an intriguing book blurb.

So, as Deborah Ross stated in her review on Goodreads, "The setting, very much like England in the throes of national PTSD following the First World War, a magic-yielding aristocracy, a conflicted hero and so forth, are familiar enough to be recognisable, yet integrated into a freshly imagine world."  I think that explains it perfectly.  😊

Just about everything works. There were a few places that I thought could use a bit more editing to make things a bit clearer, and maybe a tweak or two for the pacing, but they're mostly quibbles. The character of Miles is terrific and sympathetic and you can' help but like him. The secondary players - it's written in the 1st person POV so everyone else is a secondary for me - are interesting and possess more than one dimension.  The mysteries of the plot are intriguing and kept me guessing in many cases, and when they didn't, when I guessed what was happening, I kind of felt that maybe I was supposed to.

My one caveat is the whole romance angle.  The book is marketed as a fantasy romance, but it seems to me to be more a fantasy novel, set in an AU of WWI England with an important romantic subplot.  The romance is really far from the main element of this story.  So much so that the light-heartedness that permeated the last pages seemed almost out of place for the rest of the novel.  So beware, if you're looking for a romance-heavy story, I don't think this is it.

That being said, I cannot WAIT for the next book to come out.  It's coming out in February of 2020 according to both Kobo and Amazon.  On Goodreads, the author has responded to the question by saying summer of 2019.  God only knows.  And not only that, the images for Book Two have as its title Greystar while the text shows it as Stormsong.  Again, your guess is a good as mine.  All I know is that I will be there to read it. :)
Posted by Evaine at 8:17 PM No comments: 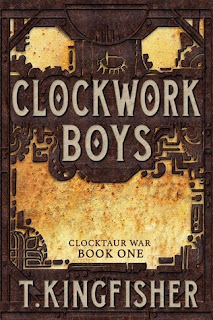 This was a good, fun, intriguing read, despite how long it took me to finish it.  I was suffering from a bad cold and could not concentrate for long periods of time.

That being said, I totally enjoyed the 3 main characters and their 'misfittedness'.  There is a lot of snark back and forth which made me chuckle.  And while one of the main characters is indeed a paladin, he's not insufferably upright.  Well, not really.  Just enough to make it fun.

The one glaring downfall to this book - for me - is that it ends rather abruptly.  Not exactly a cliffhanger, but honestly?... not many questions have been answered.  The book felt more like Part One of a two or three part novel.  Even in the author's notes, reference was made to the fact that it was originally 130K + in draft form so it was split into two.  Honestly?  I'd have preferred the whole thing.  So I docked a half a point for that, because things like that matter to me and my reading enjoyment.

Anyway, it's a fun, sometimes dark, swords and sorcery adventure with great dialogue and memorable characters and I WILL be picking up the second book.  :)
Posted by Evaine at 6:46 PM No comments:

Point of Sighs by Melissa Scott 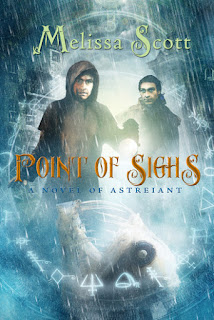 I love this series and I love the two main characters, Philip Eslingen and Nico Rathe.  I love that in this book they're getting a little more settled into their relationship.  And they've not forgotten Sunflower, the dog!  I love that Nico is a born pointsman (policeman), smart, logical, observant and so upright sometimes that it hurts!  And I love that Philip, one of the leaders of the new City Guard (a type of militia unit), is more of a running on instinct fellow, more liable to jump to the right conclusions and just sly enough to get by.  And I love that the author doesn't forget to remind us of his soldiering/cavalry roots.

The mystery this time around focusses on the water.  The weather, the river, the tunnels beneath the city. Philip is quite unlucky with water, his stars being very bad for it.  There are abductions, murders, thugs and bribery.  There are river monsters and a river spirit who is absolutely evil.  And there are some pointespeople at the Point of Sighs office that we start to get to know, mostly don't trust at the beginning but then see Rathe be Rathe and grudgingly they begin to be won over.

One thing that bugged me however, and I don't remember it being the case in previous books.  The society of Nico and Philip's world is matriarchal. No problem, I'm good with that.  But in many instances, the narrative would read something like...  oh... he was looking for a place where a woman might hide - it was every woman for herself - which is all well and good, but when the story is being told from a man's POV, it's kind of jarring for me.  Because I find myself wondering if why they're looking for a woman, if they're ONLY looking for a woman, did I miss why it's a woman.  It felt almost obnoxious to my reading ear, but maybe that's because I'm 61 years old with 55 years of reading under my belt and habits are hard to break.

But I loved this visit to Astreiant and I truly hope there are more, 'cause I'll be there to buy them!
Posted by Evaine at 11:04 PM No comments: