Champion of the Scarlet Wolf (Book 1) by Ginn Hale 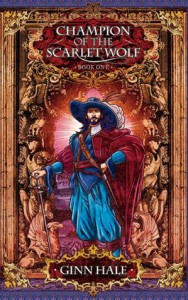 Wonderful fun book! Terrific characters that I can quickly to love. I'm so glad to be reading Elezar's story - I always thought there was more to him than we were allowed to see in the Lord of the White Hell books.

And as with the Lord of the White Hell duology - there's an insane cliffhanger that makes me very happy that I learned from my previous experience and waited until I had both books to begin reading.

So, contrary to what I usually do with series books these days, I'm diving right in to Book 2!
Posted by Evaine at 12:30 PM No comments:

Down and Dirty by Rhys Ford 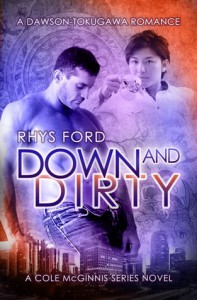 So people clamoured to hear Bobby's story, Bobby being Cole McGinnis' (of the Cole McGinnis Mysteries) best friend. I was definitely not averse - especially when it led to getting to know Cole's new brother, Ichiro, Ichi.

Down and Dirty is not a mystery. It takes place in the same time frame as Dirty Deeds and we get to see some episodes from Dirty Deeds through another pair of eyes. Which is really interesting because maybe it's not used a lot. Thankfully. :)

It's a romance. It's Bobby and Ichi's romance and it's sweet and hot and fun and sexy and even heart-breaking at some points. Some of Bobby's inner dialogues about himself being a couple of those points. And Ichi's memories of growing up. I would have liked more between Bobby and his son, Jamie and see more interaction between them and Ichi.

So Down and Dirty is another fun and sexy read from Rhys Ford and a welcome addition to the series. :)

Oh, if I didn't mention it before, when I read about Bobby, I envision Chris Meloni in my mind's eye. 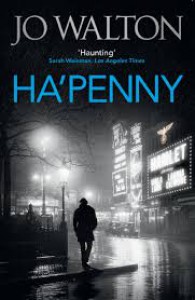 Inspector Carmichael of Scotland Yard is back and boy has he got problems!

The alternate world that Jo Walton has created, "In 1949, eight years after the "Peace with Honor" was negotiated between Great Britain and Nazi Germany by the Farthing Set, England has completed its slide into fascist dicatorship.", is utterly fascinating. It causes you to ponder the might have beens and what ifs. Fascinating. :)

I call this book a thriller as opposed to a mystery because it's really not about who killed whom and why, it's a race (even if the 'good guys' don't know it until near the end) against time and a bomb that could change the world once again. So it felt more like a thriller.

Again, Walton alternates her narrative between the 1st Person POV of actress Viola Lark and the 3rd person tight POV of Inspector Carmichael. And again, it works very, very well. I was concerned that Viola would turn out to be too similar to Lucy, the heroine of the first book, but her voice was quite different and quite distinct.

I was thrilled to see Jack, Carmichael's long-time partner, get some screen time in this book. It was quite interesting to see more of Carmichael's private life and learn more about how he has to be so very careful in this reality.

There's some heart-break in this book as well and I found myself tearing up a time or two and at one point I think I actually yelled at the author. *LOL*

A yummy, delicious, complex, intriguing, fascinating treat and I can't wait to read #3 in the series. 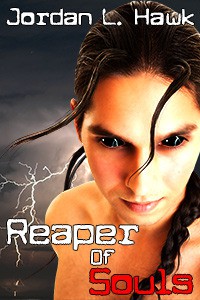 Not really much to say about this instalment of the Spectr series except that I totally enjoyed it. There was some character grown from both Caleb and John and I really liked how John's opinion and feelings towards Gray are changing and growing. Caleb remains a lot of fun and I really enjoy the 'inside' interactions between him and Gray.
Posted by Evaine at 12:20 PM No comments: 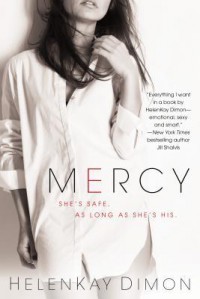 How can one enjoy a romance book so much and dislike the heroine so much at the same time? I dunno, but I did. *LOL*

(It's not the first time either - Lex from the Kit Rocha Beyond series is not one of my faves but I adore the series and the rest of the gang.)

I follow HelenKay on Twitter and have for a while, yet this is the first thing of hers that I've read. I started following her because I loved the RTs of hers I would read in other authors' feeds. And because she loves Strike Back which is one of my favourite shows. *LOL*

So yes, Mercy is the first of her books I have read. I bought the premise for the most part - disavowed CIA agent seeks help from the man she betrayed - even though I was never quite clear on the details of the original operation and how anyone but Becca, the heroine, figured into things. But we're here for the romance, so my little twinges were easily overlooked.

Jarrett is the hero, and I quite liked him, even when he was being a total douchenozzle. Maybe I could relate easily to his wish to get revenge for how Becca destroyed him and then when it came right down to it, he couldn't and that pissed him off even more. I get that. *LOL* I would have liked a wee bit more on why he was so much in love with Becca other than that whole incredible physical attraction. Yes, it was about trust and feeling safe, but I found myself wishing for a little more outright talking about those issues between the two of them.

My favourite character in the book was Wade, Jarrett's second in command. Oh, I fell hard for him. His love story is heart-breaking, so thank God I know there's more to come in the subsequent book and novella or else I'd have to go postal. And bravo to HelenKay for having this as a huge sub-plot in the book. Not many authors would give that much page time to an m/m love story. Hopefully... HOPEFULLY, Eli gets a little more palatable as things go along, because man, he's got a crazy hair trigger and HUGE anger issues. And I also loved what we saw of Jarrett's other best friend and lawyer, Sebastian, Bast as they call him. When reading about him I thought of James Scott who played EJ DiMera on Days of Our Lives. I also liked the bits we saw of Kyra, Wade's little sister. Even Nathalie, the CIA agent ended up okay by the end of the book.

So then there's Becca - the heroine. I never warmed up to her at all. I found her a self-centred, short-tempered, selfish, game-playing brat. This is probably why I thought I needed more communication between her and Jarrett to fully buy the deep, abiding love. I get that in the situation being written about where the woman puts herself under the man's control in a sort of coerced manner, the author has to be careful about the consent line and the alphahole syndrome etc... but, for me, instead of coming off as a strong, independent, capable woman, she often came off as shrill and over-bearing.

But that being said, I really, really enjoyed the book! *LOL* Imagine if I'd actually LIKED the heroine! I am anxious to read the next one but it's not in the book budget this month unless it goes on sale. :( I do have the novella, Taken, in my Kobo, but I'm assuming I should read Only first.

If you like hot, sexy, edge-of-danger tales with lots and lots of sex, well, this one's for you!

The Grace of Kings by Ken Liu 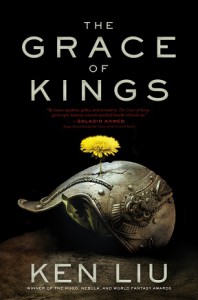 What a good book! A real tasty read. I enjoyed it so much!
You know, the word exotic is looked down upon these days, in some quarters, as some kind of insult, but to this gal, brought up in Montreal, Quebec, Canada, the setting of this epic story was very exotic to me. I kept thinking that it had a Samoan feel to it and what the hell do I know about Samoan culture or anything at all, but I think it was the islands that did it.

So this is Ken Liu's first book. What a talent! His work puts me in mind of Guy Gavriel Kay's work. Tigana, The Lions of Al-Rassan etc... The Grace of Kings is the story of rebellion and upheaval, heroes and villains, gods behaving badly at times and of how being a good man or woman is far from a clear-cut thing.

Liu has created a fascinating world for us to travel through. There are not a lot of what I'd call fantasy-trappings. There are a few odd creatures, meddling gods and maybe a trick or two but that's about it. We follow the story of the two main characters, the heroes of the story, Kuni and Mata, who are heart-breakingly real with their flaws and uncertainties. Indeed, all the characters are multi-dimensional, even the ones that only appear for a few pages. And the women are as deftly drawn as the men. Just when you think you know how a character is going to react, they surprise you and there are damned fine reasons for them to do what they do.

This is also a story that poses different questions through the narrative. Is a tyrant really a tyrant? Does the hero always do heroic things and indeed are these heroic things only heroic depending on which side of the fence you're on? And even the most basic, what is right and what is wrong. I will admit to having to refer to the cast of characters provided by the author at the beginning of the book in order to keep who was who straight at times. Again, I shall plead my brain not being used to the sound and look of them. I referred to the map as well, and I will say that it's the one drawback of reading on an ereader. The inability to flip back and forth easily. But that's nothing to do with the wonderfulness of the book. :)

A luscious book. Intriguing. Fascinating. And while it's the first of the Dandelion Dynasty trilogy (oh, the story of the Dandelion is WONDERFUL!!) I didn't feel as if the story left anything untold by the time I got to the end but I can't wait to read the next one! :)