Of Blood and Bone by Nora Roberts 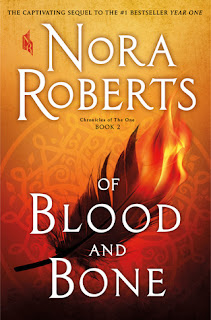 Chronicles of the One - Book Two

The last of my six Christmas books.  It was a good year!

This is the second of Nora's post-apocalyptic trilogy and it carries on the story of Year One, beginning thirteen years after those events.  We find out what has happened with many of our favourites from the first book and we get to meet The One - Fallon Swift - 13 year old daughter of Lana and Max, as well as catch up with Duncan and Tonia (Katie's twins and grandchildren of  the man who was basically 'patient zero' in the first book) who were just babies the last time we saw them.

It's very much a book about the training of Fallon to take her place as the leader of her people.  We watch as she leaves her home and family to train with Mallick (a Merlin type character who I wish we'd seen more in depth) for two years.  She gains her powers and her mystical companions, the owl, the wolf and the alicorn.  We follow as she returns home and spends time with her parents and younger brothers on the family farm, readying them for the Big Battle to come.  We see her meet Duncan and Tonia and watch as they discover that they're meant to be this series' trio - Nora loves her trios of power.  And we journey with Fallon's family as they join up with the bunch from New Hope, the folks we followed and watched come together in the first book.

Along the way, there are some looks in on the New Hope settlement and a couple of quick meetings between Fallon and some of the folk.  There are a few battles and rescues.  And there are more than a few moments of discovering her powers.

It's very much setting everything in place for the Big Battle to come in the third book and were it not for the engaging way Nora writes about her characters and the heart-touching moments of found family and shared histories that pepper the story, it would be a very boring book, I think.  It's very much a middle book.

I enjoyed my read. As always with Nora books, I zipped merrily along, her writing style so easy to read.  There were moments of humour, moments of action and danger, moments of love and deep emotion and I will admit to being engrossed.  :)   I am very much looking forward to the culmination of the trilogy, due out at the end of the year.
Posted by Evaine at 10:24 PM No comments:

Email ThisBlogThis!Share to TwitterShare to FacebookShare to Pinterest
Labels: Chronicles of the One, Fantasy, Nora Roberts, Post-Apocalyptic 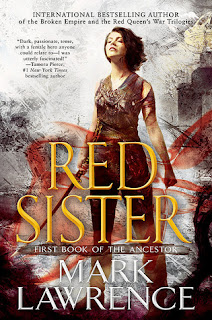 Book of the Ancestor - Book 1

Christmas book #5, a new trilogy and a success!  I had read the Broken Empire Trilogy by Mark Lawrence a couple of years ago and disliked it intensely.  I found it very, very dark with no hope offered anywhere and a plethora of unlikable characters, so having Red Sister on my list was a chance I took only after seeing more than a few reviews stating it was not as dark as the others and after a few trusted authors recommended it.

The book is the story of little Nona Grey and her arrival at the Convent of Sweet Mercy at the tender age of nine and continues for the next couple of years.  Yep, when the book finishes, she's barely eleven.  And while normally I would avoid a nearly 500 page book about a kid, I fell into the story so easily and so quickly it would make your head spin.  *LOL*  Nona is fascinating.  She reminds of the character of Laura in the movie Logan. In fact, I kept imagining the actress who played Laura in my head as I read about Nona.  Might have a bit to do with the claws.

Nona goes through her training, makes friends and enemies and comes to a lot of realisations throughout the book, and her journey kept me turning the pages quite eagerly.  Quite the contrary of the the story of Jorg in that other trilogy.  Yeah, there is plenty of dark in Red Sister, but it never feels hopeless.  And the characters, all of whom have flaws, believable flaws, worked like a charm.  Lawrence even kills off one or two that I was very fond of, but that worked too.  Couldn't hate him for it.

And the world-building!  Fascinating!

So, yes, I was really glad I decided to give it a try and am anxious to get to the next book, Grey Sister. Oh, and the cover illustration is quite glorious. :)
Posted by Evaine at 2:30 PM No comments:

The Guns Above by Robyn Bennis 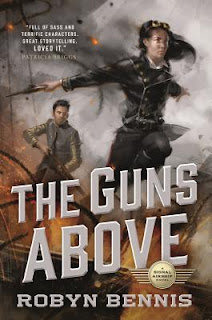 So this was #4 of my Christmas books and while I did enjoy my read, I had been hoping for much more.  All the buzz on my social media was lauding the book to the skies as the best thing ever!  And so great to have a female main protagonist in a steampunk airship military fantasy book.  Well... yeah... okay... but it wasn't that great, folks.

I liked it because the dialogue was witty, the characters fun and quite honestly, I'm a bit of an easy sell for a book about a tight group of soldiers/adventurers/scoundrels/whatevers fighting the odds, so to speak.

Now, while I liked the characters, I sure would have liked more about them, what brought them to the point where they are in the story, what formed them, the whys of them, all that stuff.  Especially Josette, the female captain and Bernat - Bernie, the foppish spy/aristocrat/ne'er do well.  I loved their banter - I'm told it's rather Pratchett-esque, but having only read one Prachett book (aside from Good Omens), I can't say with any kind of certainty if that's right or not.

There was a lot, an awful lot of battle narrative and even more description of the details of the airship. I mean... tons of details into all the nooks and crannies.  I would much rather have learned more about the characters and the society and the actual world of the story than all that minute stuff about the ship.

So yeah, I don't get all the glowing blah-blah I read from people whose opinions I respect.  Just because the MC is a woman?  I mean, even that HUGE plot point is barely discussed or examined - far better we learn about fictitious airship mechanics.  I think we should be far past celebrations just because a woman leads a military/steampunk adventure fantasy.

So the book had great bones, but the meat of it was sadly lacking for me.  I'll check out the second book when it comes out, I'm sure, if only to see if there's more meat, so to speak.

Posted by Evaine at 7:31 PM No comments: 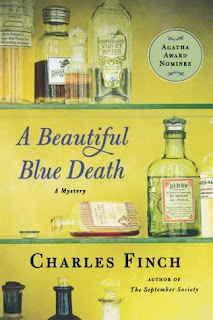 This is the third book from my Christmas haul and again, I enjoyed my read.

The book and the author were recommended by one of my most favourite authors, Louise Penny, the author of the Gamache series.  I just spent 20 minutes trying to find the reference and failed miserably  *LOL*.   Anyway, that's the reason I picked it up.

So, Charles Lenox is a Victorian gentleman who likes to solve mysteries. He has an interesting group of family and friends and he's a smart fellow.  I liked him.  I can see why Louise likes him as well - there's a faint Gamachian feel to the book and the characters which is fine by me.

I like Finch's writing style, it's easy to read and while there are instances of what could be termed as info-dumping, they're handled well and not annoying.  He also does some easy back and forth banter between Lenox and his old friends that I found quite fun.

The mystery worked for me, as did the wrapping up of the various plot-lines.  There was a question or two that didn't get answered, or if it did, I missed it, but that didn't impede my enjoyment of the book.

If I had one real problem with the book, it was that there was an awful lot of snowing going on in London for late December/early January.  I don't think it snows that much over there at all.

Anyway, I enjoyed the book enough to add Book 2 to my wishlist.  :)
Posted by Evaine at 2:13 PM No comments:

A Plague of Giants by Kevin Hearne 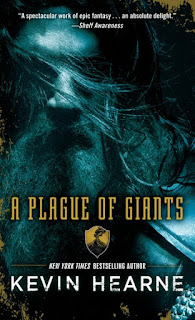 The Seven Kennings - Book One

The second read of my Christmas presents, this was a brick, but a fascinating one indeed. I'd read Kevin Hearne before, the first of his Iron Druid books, and quite enjoyed it. (I intend to continue on in that series when the budget allows it.)  This book is the first of an entirely new trilogy, set in a new world.  And I was fascinated.

The world-building is terrific.  Magic or kenning that actually takes a toll on the human body even to the point of death.  The majority of the peoples are shades of brown with the pale-skinned folk being the minority of civilizations and I think there's only one king among the bunch.  Hearne does a masterful job of getting across the atmosphere and the feel of the different 'countries' and while they mostly have a familiar feel, I never felt they were copies of other creations.

It's the characters that really sold the book for me.  The story is told almost in serial form by a bard by the name of Fintan, who takes on the appearances of different folk within the story as he tells the story, a little bit every day.  Usually two characters, maybe three.  In between these story-tellings, we get the POV of Dervan, the scribe who has been tasked with recording all the stories Fintan tells, as well as keeping an eye on him for his friend, the leader of the Brynt people.

We meet two handfuls of characters who tell the story of the initial invasions of the giants and through their telling of the story we're given the base of the bigger story to come, I'm guessing.  Lots and lots of set-up happening, but because the characters were so engaging - even the baddies - it was a pleasure to read.

So, I really, really enjoyed it and am looking forward to Book 2 - especially the further adventures of Abhi and his bloodcat, Murr and his stalk hawk, Eep.
Posted by Evaine at 9:26 PM No comments: