A Duke By Default by Alyssa Cole 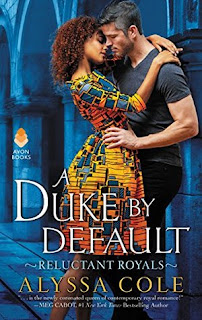 So this is a daunting book only because it's one of the darlings of 2018.  EVERYONE loves this book and it's a darling of Romancelandia.  So I was a little wary going into it.  The last time I read a book that was so universally loved, it was The Bollywood Bride, and I hated it.  Did not see what any of the fuss was about.

Thank God, this book was a different experience.

So, I had been advised that I didn't need to have read the first book in the series to enjoy this one, but I'll tell ya, I wish I had.  There were so many instances where the heroine's past was mentioned that had important bearing on the plot but were never explained that my wondering took me out of the story.  And the story was GREAT, so this was quite bothersome.  I STILL don't know the deal with Portia's (the heroine) sister.  And it BUGS me.  So YES, READ THE FIRST BOOK.

So, Portia is a screw up, who, it turns out, suffers from ADHD.  This explains many things about her and her issues.  I liked her.  I liked her a lot. I liked that she was smart and clever. I liked her smart mouth and like many of her friends and her sister, I often wanted to shake her to make her believe she wasn't the mess she thought she was.

I liked the hero, Tav, the Duke by Default of the title.  He was older, 37 to her 30 (THANK GOD for mature characters!!) and your typical taciturn Scot.  And he was HOT.  And he forges weapons, swords, daggers, axes... the whole thing!  That's darned sexy.  Anyway, he hit all the right buttons for me.

From my lofty 62 years of life, I thought that if they only would take an hour or two to actually talk about all these things that bothered each of them about themselves, the whole emotional mess could have been dealt with quickly and easily.  But we wouldn't have a story then.  *LOL*  And it was a good story, maybe a little heavy at times with the ADHD and the immigration problem, but the author's writing style is breezy and fun (a big reason why AC is a fave of mine.) which saved it from being too lecture-y.

In the end, it was a really good romance.  I totally enjoyed it and I can easily see how it garnered so many accolades and such noisy support. Just read the first book first!
Posted by Evaine at 1:24 AM No comments:

Of Sand and Malice Made by Bradley P. Beaulieu 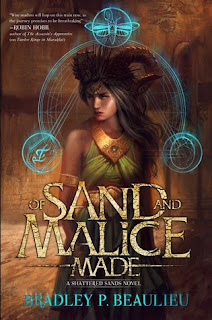 So this is a big novella that takes place before the beginning of the epic series and introduces us to a teenage Cedi. It's basically the story of Ceda and her battle with the ehrehk, Rumayesh.  Ehrehks are creatures created by the gods long ago and there's nothing good about them.

The book reads like three serial installments of a story which, for me, was a little off-putting.  Flow-wise.  A matter of personal preference, I think.  Other than that, it was a pleasure to sink into the author's writing again.

At any rate, it was cool to see more of young Ceda and indeed just to visit Sharakhai again.  We get to see a bit of other favourite characters too.  It was a fun read.
Posted by Evaine at 12:50 AM No comments: 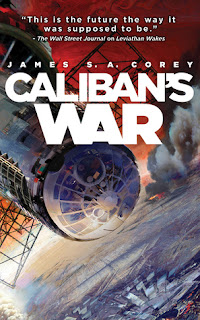 Excellent sequel to the first book of the series.  All our favourite characters have returned... well most of them.  :)  I have been firmly confirmed in my favouritism towards Amos and Chrisjen Avasarala. That being said, I love most of the characters.  And we get to meet the stellar Bobbie Draper, Martian marine extraordinaire. She and Chrisjen working together are the absolute best.

The plot of this book clips along at a decent pace and the writing style makes it an easy, fluid read.  I have to say that I've watched all 3 existing seasons of The Expanse and have found that the they're fairly faithful to the books and the changes not too jarring.

Anyway, loved my read and am looking forward to getting to book 3, which I have on tap soon.  :)
Posted by Evaine at 4:49 PM No comments: 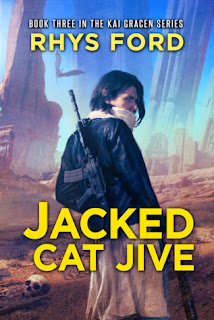 Thank you Rhys!  I swear, Rhys' books never disappoint, and this, the 3rd in the series that stars my favourite of her characters certainly followed suit.

I don't quite know what to say, except that Kai is his usually cranky, soft-hearted, brave, cynical self and I still am in love with him.  :)  I was happy that his relationship with Ryder, the elfin lord made some progression.  I love their banter, I love what's unsaid between them and I love how they have each others' backs, no matter what.  Ryder makes me chuckle.

I was also happy to get the chance to know Cari a little better.  I wish she'd had a little more to do though and that we could have explored her special power a tad.  But she's a ballsy young lady and I quite enjoy her.  The new character of Kerrick was interesting - Ryder's cousin yet so very unlike Ryder.  And then there was Bannon who I found even MORE interesting.  No doubt we'll be seeing more of her in future books.  And we got the chance to visit with that uber crankass, Dempsey.  I enjoyed that too.

So there was adventure, some sadness, some great fights, some romance, some growing social awareness and loyalties being forged stronger. It was a thrill ride and I loved it!  It's going to feel like FOREVER until the next one!

Posted by Evaine at 7:21 PM No comments: 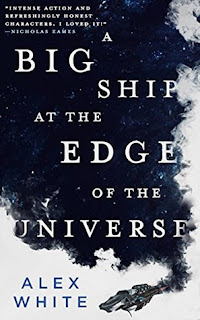 The Salvagers - Book One

I hemmed and hawed about rating this book between 3.5 and 4 stars, but I went for 4 stars because it was a lot of fun.  I saw it described somewhere as a Firefly-esque story mixed in with some Fast and Furious and that works for me. We have a rag-tag group of characters hieing their way across the galaxy in search of a rather mythical warship that would be one helluva salvage score.  It's mostly space opera with a hefty side order of magic and while the magic was never really explained, I found it didn't matter much to me.

There are some fun characters here and I became fond of most, if not all of them.  I loved the banter between them all and even if one of the main characters, the youthful race car driver, Nilah, made me want to shake her at times, it was an amused shake.

Only a couple of things bothered me, and they were probably small, but whenever I came across them in the book, it threw me right out of the story for a moment or two.  Firstly, the author decided that ships aren't "she" in this far future universe, they are "he". Don't know why, there's never an explanation or anything, but every time the ship was designated this way, it gave me pause.  The other thing was that the Captain called his crew Miss Thing, Missus Thing, Mister Thing (whatever their family names were) and it felt so out of place in this futuristic universe that I was pulled right out of the story.  I found it peculiar.

Anyway, all in all, it was a super fun read and if you enjoy KB Wagers Idranan Trilogy or James Corey's Expanse series, you'll probably enjoy this one. I'm looking forward to the next book - it's on my list.
Posted by Evaine at 1:25 AM No comments: