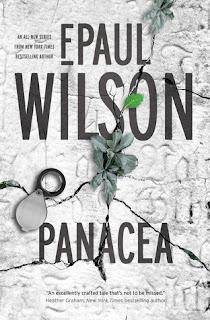 F. Paul Wilson is a favourite author of a bunch of my friends and one of them recommended Panacea to me, knowing I enjoy a good thriller.  And I did enjoy this one.  :)

It's a typical thriller in that there's a lot of action, a bunch of twisty turny investigations, bad guys with big guns and lots of power, good guys with a bit of mystery in their pasts, and a possible world-wide disaster to be avoided.  There's also a cute kid and some ancient mythology.

The book reads lickety split, thanks to some great pacing by the author and chapters that don't run into the 30+ page realm.  I'm a firm believe that short chapters help give a book an aspect of  "can't put it down" or "just one more chapter before I sleep" type of thing.  The characters aren't really complex, but they are believable in a thriller sort of way.  And they're likable - well the good guys anyway - and that, for me, is important.  I especially liked Rick Hayden and his sense of humour.  I also liked him together with Laura Fanning.  There's going to be some romance, somewhere along the line, but there's little of it here, just the pair getting to know each other and starting to trust each other as they search.

I like the idea of ancient history and ancient mysteries being explored and the whole secret societies thing.  I find it all quite fascinating.

Wilson, I think, is more known for his horror books - Repairman Jack and the like - but there's not much horror in this book.  One scene though.... near the end... well, I guess it was more gross than horror, but EWWWWW!  *LOL*

I think if you enjoy books like the Sigma Force books by James Rollins, you'll enjoy this.  I know I'll be looking to add Book 2 to my library.  :)

Posted by Evaine at 2:49 PM No comments:

It Takes Two to Tumble by Cat Sebastian 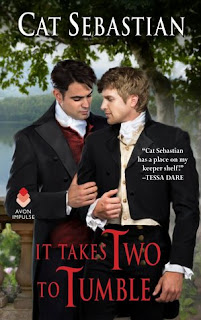 This first of a projected series was recommended all over my Twitter feed as being a fun, sexy read.  And the recs weren't wrong.  :)

The two main characters were a little different from the norm.  A ship's captain and a vicar.  I liked their characters.  Phillip, the widowed naval captain with the three unruly children is a grumpy, clueless, stern and standoffish fellow who we soon learn actually does have a heart under that disciplined exterior.

Benedict, or Ben, the vicar, is a sweetheart.  Takes care of everyone.  Good humoured and understanding and endowed with a huge heart, he's the perfect foil for Phillip.

I honestly can't say that any new ground in historical, gay romances was broken here, but it's certainly a fun and entertaining read.  The love story is sweet and believable, the sexytimes are hot, and the children aren't little paragons of cleverness or virtue or old beyond their years.

I enjoyed it quite a bit!  And I'm looking forward to the next in the series.

Posted by Evaine at 9:44 PM No comments: 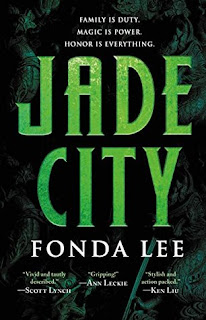 I really have to start putting my thoughts down when I finish my books, not three days later!

I really enjoyed this book, more than I thought I would, if I'm honest.  It's The Godfather meets Ninjas and Yakuza clans in a 1950's-ish time and on the Island of Kekon where jade is magical, giving enhanced abilities to some who are known as the Green Bone Warriors.

I found the first maybe third of the book a little slow, as things got set up and we meet the main players, the Kaul family, as well as the a slew of secondary characters.  It's a typical clan type family, I guess, with the 'retired' grandfather who is having difficulty letting go of his power.  His three grandchildren, Lan, Hilo, Shae and the adopted Anden.  Lan, the eldest, is the new Pillar or head of the No Peak clan, Hilo is the Horn, the second-in-command.  Their sister, Shae, has been away from the island and the clan for a while and has been living without her jade.  Anden, the youngest, about to leave his teen years behind is a senior at the Academy, just about ready to graduate and take his jade as well as his position within the family.

Once we begin to know all the characters and get somewhat of a handle on them, the story really kicks in.  We're talking murders, assassinations, stolen jade, government scandals, love affairs, clans heading to war and maybe even the total collapse of their island and way of life.

The world-building is intricate and terrific and the characters, main, secondary and even the walk-ons are deftly drawn.  Once we get into things, the plot moves along quite nicely with twists and turns and surprises along the way.  Some good and some bad.  Some I saw coming, some I did not.

So, yes, this is one of those books where I wish I could write a decent review because I feel like I'm not doing it justice.  It's a terrific book and I can't wait for the second book to come out. 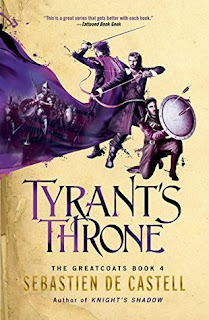 I finished this a few days ago and promptly got sidetracked and forgot to write up my thoughts!  And it's not because it wasn't good,  because it was GREAT!

In this, the fourth book of the Greatcoats quartet, the tale of Falcio, Kest, Brasti et al comes to its finale and my goodness it's not what you'd expect.  :)   And just when you thought you knew everything about the land of Tristia it turns out that you knew next to nothing!  *LOL*  I felt like Jon Snow there for a bit.  :)  But what we discover... mama mia, it opens the door to all kinds of musings and ponderings!

I found this book a little more serious, a little deeper than the previous three and I wonder if that's down to us being inside Falcio's head as everything gets turned upside down and sideways.  Probably. But despite that, there was still the humour, still the swashbuckling, still the larger than life characters that I've grown to love over the past books.

So I loved the way that Sebastien wrapped things up.  The adventure, the politics, the ethical conundrums, the brotherhood, it was all there.  And the ending was perfect even if just a wee bit open-ended.  THAT made me happy, the hope of seeing our faves again.

I still love Brasti beyond all belief, I really think he's my favourite character.  Brasti, Monster and the latest addition, Chalmers - my God, I fell in love with Chalmers!

Anyway, incoherent as this is, I loved this book, I loved this whole quartet of books and I thank Sebastien de Castell for writing them!

Posted by Evaine at 1:58 PM No comments: