Beyond Solitude by Kit Rocha 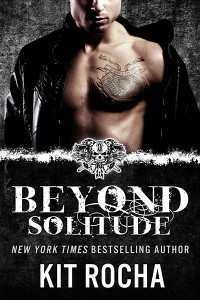 I hadn't been planning to read this novella just yet, but when I ended up in the hospital ER with my son (kidney stone), it was the perfect read to take my mind off my worries.

First off, let me say that the reason I gave it 3.5 stars instead of 4 is because it was too damned short and the consequence of that was that I didn't learn nearly as much about Ford as I wanted to. Mia was a little more fleshed out, I thought, but I could have gotten deeper into what makes her tick too.

I think Ford may just be my second favourite male character in the Beyond books, after Ace. The read I get from what we're given in the book is that he's a little older than most of the other O'Kanes. And he thinks before he acts for the most part. And I like both of those things.

I liked Mia a lot too. I liked how she pretty much understood what Ford was dealing with after his accident from pretty much the beginning and acted accordingly. She read as a lot younger than Ford, but I thought they fit together right well from the very beginning. It felt to me that their chemistry was instant and it was shown through the simple parts of their interaction. I didn't need the gutpunches and the flushes etc... to get it, you know? But when those did come, it was perfectly right - and good. :)

As always, the intimate scenes - be they filled with lots of steamy, hot sex or just a random touch and a look - were excellently done. And they were the characters' own scenes. They weren't a rewrite of any of the others that have come before in the Beyond series and that's not always the case in these romantic series.

I just wanted MORE! I wanted more scenes like the one where Ford and Mia went on their motorcycle ride outside of the sector. I wanted to see more of how Mia was settling in with the core community of the O'Kanes, making friends etc... and see more of how Ford was healing and how the two of them were creating their life together. And more Ford period. :)

I love this series and can't wait until the next one comes out!