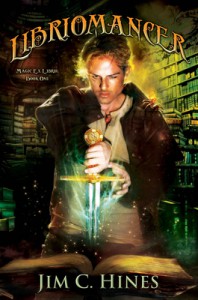 Magic Ex Libris - Book 1
Let me begin by saying that I will need to get Book Two. I really enjoyed my read.

So what's a libriomancer? Well, it's a person who can 'reach' into books and create objects from their pages. And it appears that the world as we know it is going to end up going to hell in a handbasket unless Isaac does something. Accompanied by a dryad named Lena Greenwood and his own man's best friend, Smudge, the fire spider he sets off to dive into a situation that's totally over his head and WAY above his paygrade. *LOL*

Isaac and Lena were great characters and I grew fond of them very quickly. Smudge, I loved from the get go! They had their faults, some of the big ones, but even so at times I thought that maybe Isaac was a little too good to be true in the way he managed to get them out of situations. But he just about always got his ass handed to him physically, so I guess that makes up for it. :)

Look, it's a magical adventure novel, rip-roaring and tons of fun, and as such, it hit the spot almost perfectly. The world-building and the system of magic is fascinating, but I think it helps if one is decently read in the SFF world in order to get all the details of the magic that Isaac uses.