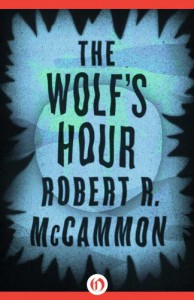 This was surprising read for me. Surprising because it's not really my normal fare and surprising because I quite enjoyed the read. I bought this book when author Chuck Wendig mentioned it in a tweet a few months ago and it ended up either being a 99¢ deal or a freebie. I figured what the hell... I enjoy WWII resistance fighter stories and I can put up with the 'shifter' aspect of it - not being overly fond of shifter stories - so I bought it and finally felt the urge to read it this past week.

Surprise! Yes, it's about a werewolf, but it's not a 'shifter' story. It's a story about a lycanthrope who is an allied spy and goes on a very important mission behind enemy lines just before D-Day. To me, 'shifter' implies a hefty dose of romance with the romantic interest having to come to terms with the shifter's otherness. None of that here. Mikhail Gallatinov (who becomes known as Michael Gallatin in Britian) is a lycanthrope, pure and simple and let me tell you, the chapters dealing with how he became such and how he grew into his 'power' are fascinating and really unlike anything I've ever read in a shifter book. Brutal, intense, logical, the transformation takes its time unfolding. By the time that part of the tale is finished, I really found I could empathise with Michael's duality. The chapter's dealing with Mikhail's youth and transformation are placed along the narrative, interspersing changes of venue on the mission. I really found these chapters masterfully done.

The part of the story dealing with the mission read to me like a James Bond story. And there's nothing wrong with that - action packed, filled with twists and turns, betrayals and rescues from unforseen quarters, a cast of friends and villains that are all familiar but fit perfectly in the story. I'm down with that! :) That's part of the fun of reading an adventure story.

One problem I had was that there is constant head-hopping. I think that maybe some of it has to do with the way the ebook is formatted, the double space between paragraphs that indicates a change of scene or POV was not there at certain times I thought it should be. Other times, it was just plain old head hopping and that annoyed me. Thank God it wasn't constant or I'd not have been able to enjoy the book at all - I'd have suffered from reading whiplash! *LOL*

Another small thing... I hate the cover of the book. It's so uninspiring. It would never have caught my eye, so it's a good thing that I followed Wendig's rec. :) For an interesting and different take on werewolves and a fun, action-packed WWII spy adventure, you could do much worse than read The Wolf's Hour. Which apparently is 11:00 for some reason I'm not sure was explained or not.