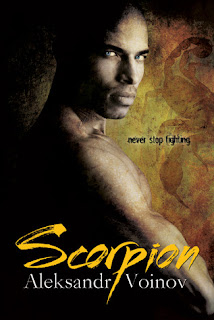 4.5 Stars. Aleksandr Voinov has a new fan in me. The authors whose work I love and whose recs I trust, recommended Mr. Voinov, so DSP was having a sale and I thought it the perfect time to check him out.

I thought I was buying a contemporary spy/military, Navy Sealesque type book - BOY, was I surprised! (I only really scanned the blurb.) I guess the best way to describe Scorpion is that it's a military novel set in an alternate, fantasy world. But no elves or wizards here, not that type of fantasy.

It's dark, it's intense, it's the story of Kendras, a soldier, a Scorpion and a very honourable man. It's a tough, rough, intense story, peopled by rough, intense characters. There's death, blood, beatings, torture and all kinds of mayhem. There are also moments of pure tenderness that take your breath away because you don't expect them after all the other things. There is strength in the 'weakest' of characters and weakness in those who appear to be bastions of strength. In other words, the characters are real. (Have I used the word 'intense' enough? *LOL* It really was that.)

I like the way this book is written It flows and it's a pleasant read, technically speaking. I really couldn't put it down. I was invested in the characters, even the secondary characters. I think I actually went "Yes!" aloud when Kendras discovered his wounded comrades returning to the site of the first battle. DAMN, this was a good book! I want more. I want to know about that third battle, I want to know what happens to The Scorpions, I want to see how the newest member of the band of brothers grows and I want to see Kendras in his new role. I want to know more about the Lord and Lady Protector and their mother.