The Whirlwind in the Thorn Tree by S. A. Hunt 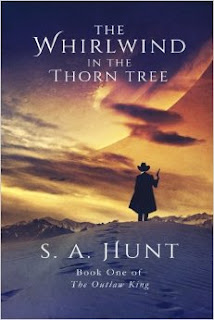 The fact that I DNFed this book should tell you what I think. And I had such high hopes for it. I mean it's rated at 4 stars on Goodreads and Amazon, for chrissakes, it shouldn't be that bad. HAH!

The premise was interesting. The father (a famous writer of fantasy books) of the MC is murdered and the MC along with a couple of new friends who were fans of his dad's end up in the father's fantasy world in search of answers. So much promise...

But the writing... THE WRITING!! It was so awful. I have a feeling that since this was a self-pubbed novel, that the author forwent a few rounds of editing. The prose is heavy, heavy, heavy with unneeded descriptions and comparisons and just general stuff we don't particularly need or want to know. If I had a dollar for every 'x is like y' comparative that the author used, I'd have a very generous book budget for the year. And then there's just plain old lack of logic. For instance: My listlessness grew by the hour until I had whipped myself in a lather and exhausted all available mental topics. How does that even work?? How can you be listless and worked up into a lather??

Another thing that made me nuts was that the story opens with the MC coming home from the war and discovering that his wife has basically cleaned out their home of everything and left him for some other guy. Then his father dies. But it's never really clear to me if that's something that follows within a few days or weeks or months or even years! And I made it halfway through the book and never heard about the wife again.

I made it halfway through and decided that life was really too short and my TBR pile too full of books I really want to read for me to waste any more time on this novel that was only annoying me with it's awfulness. I really, really have no idea how so many people could have thought this book was great... hell, even good. I honestly think that it's this type of book that makes 'industry people' look down on self-publishing. Had the author spent a little money and hired a decent all-round editor, he could have had the really good book I was hoping this was. As it is... BLECH.