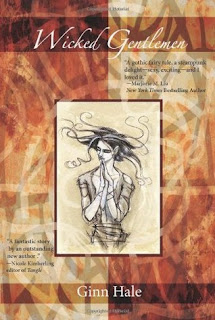 What a yummy book! Ginn Hale has created two wonderful protagonists in Belimai Sykes, a Prodigal descended from ancient demons and Captain William Harper who is a member of the constabulary aka the Inquisition.

Captain Harper seeks out Belimai's help to solve a series of murders and disappearances and the tale begins. And isn't Belimai Sykes the most delicious of names? The two men don't seem to have much to draw them together at the beginning, but as time goes on, things change... as they will. Their banter, even in the darkest of situations, is immensely enjoyable.

Watching the relationship between these two men grow is delightful. There is not a lot of overt sexytimes to be had, but that's okay by me. I'm not convinced that it would have fit with the atmosphere that the author created. The world building is fascinating. I wanted to know more and more about the Prodigals and how they were descended from the one-time angels cast out of heaven and the other-wordly powers they have. Fascinating.

I do hope that Ginn Hale brings us more of this world and these characters. They are WONDERFUL!