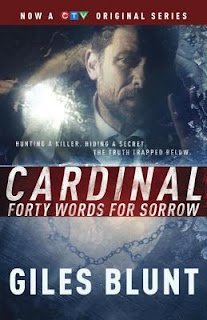 I read this first of the John Cardinal mystery thrillers to get ready for the 6-episode mini-series (Cardinal) that's coming on CTV this coming week and I'm glad I did.  The introduction of Detective John Cardinal and his new partner Lise Delorme is a pretty good read.  It didn't blow me away, but it certainly held my interest and has me looking forward to the show, which BTW, is perfectly cast with Billy Campbell and Karine Vanasse as Cardinal and Delorme respectively.

The mystery of who is committing the murders lasts until barely halfway, so this is more of a how are they going to catch 'em thriller, as well as being a character-driven narrative as we learn about John Cardinal and his somewhat shady past.  I liked Cardinal and I liked Delorme, even though we don't get to know a great deal about her.

The crimes in Forty Words for Sorrow are rather gruesome, which isn't really my favourite thing and why I only rated it 3.5 stars instead of 4.

Also, I love that it's set in Canada, a vaguely disguised North Bay, Ontario. :)