Beyond the Empire by K. B. Wagers 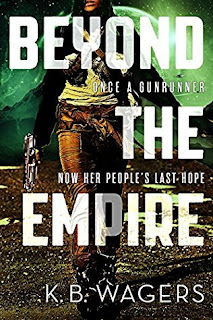 I actually finished this book 2 days ago, but I've been unable to even think about putting my thoughts down until now.  And even now, I know I'm not going to do it justice.

I loved the book and the loved the series!  I just clicked with the characters.  Or they clicked with me... whatever.  *LOL*  I'm pretty sure there might be people out there who think Hail, the gunrunner empress, is too perfect, but you know what?  She's like my superhero.  Yes, she's one of the best gunrunners in the galaxy and you don't get to be that without being pretty damned good at all facets leading, fighting, learning, listening, plotting... well, you get my drift.  So Hail Bristol is basically my Batman.  :)   And you know what else?  She's not an uberly-gifted teenager, she's almost 40 years old.  Life has battered her around some. Her knowledge and abilities, while some of it is ingrained, a lot of it has also been learned and tried in a cauldron of fire.  Anyway... yes, she is my hero.

The action in this last book of the trilogy is pretty much nonstop and the surprises keep on coming as Hail, Emmory, Zin and the gang fight to regain the Indranan throne.  People die.  And sometimes they die in a most awful manner, but such is the way of war.  Even as I was cursing the author, weeping, I knew it was something that had to happen.

There are some quite times thought.  Scenes where Hail tries to come to terms with the loyalties and expectations of her people, of her found family and even of herself.  Scenes also, where she shares intimate moments with those closest to her, and we get to see the affection and love between them.  It's like... so... I've been watching the Olympic figure skating like a good Canadian, and cheering on Tessa Virtue and Scott Moir as they won their gold medal, all the while listening to all the speculation about their relationship and are they a couple or not.  So... I watch Tess and Scott and I see Hail and her Ekam, her head bodyguard, Emmory.  It's a deep connection, it's love, it's true kindred spiritness.  They're not a couple - that's Emmory and Zin, thank you very much (and how I wish we could have some stories about their adventures as Trackers.) - but they are very much together, if that makes any kind of sense.

Okay, so, yes, I loved this trilogy so so much.  It was so much fun, so much action, so much of all kinds of things I love in my books.  There's another trilogy coming in the fall and I'm really looking forward to more adventures with Hail, Em, Zin and the gang.  But don't let that deter you, this trilogy can stand alone, honest.  :)

Oh, I loved it.  So much that I went and joined the KB's Patreon.

(And thank you again, Renzii!)