Wisp of a Thing by Alex Bledsoe 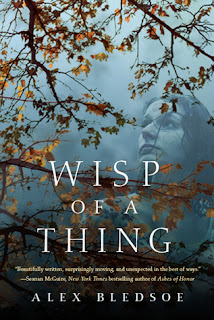 Novels of the Tufa #2

I really enjoy Alex Bledsoe's voice.  His writing is easy yet rich and full.  Perfect for the subject matter of North America's fairy population. It's not an urban fantasy, it's more a contemporary, rural fantasy, I think.  Set in the Appalachian mountains and peopled with a whole bunch of unique characters, it's the place where Rob Quillan, a musician haunted by tragedy, comes in search of a song to heal him.

Now there may be other books out there about the other-worldly creatures in this part of North America, but I can't really recall any.  As it is Bledsoe walks the perfect line of keeping the story sounding ... um, not of the city .... yet not sounding like the Clampetts.  His characters are characters, not caricatures and some you love, some you hate and some you just... know.  It's a homey book, but with an edge.  :)

And the fairy-folk themselves.  They're not the grand lord and lady types, not the ethereal little nymphs, not the austere folk we see portrayed so often.  They're good, they're bad, they're dark, they're light and they're not quite like anything I've read about before.

I think if you're a fan of Charles de Lint, you'll enjoy this series.