The Merchant of Dreams by Anne Lyle 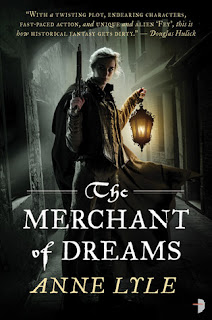 So the adventures continue for Mal, the swordsman/bodyguard/spy, and his valet Coby.  This time they're joined by Ned and Gabriel from the now defunct theatre company of book one.  Maybe it was that I read the first book back in February of 2015 and didn't remember as much as I should have, but I found this second volume of the series to be a bit disjointed and at times to be going around in circles, plot-wise.

I wanted to know more about the skraylings and felt rather short-changed in that respect. Then there was the whole thing with the spying that Mal was supposed to be doing for Walsingham that quickly became a more personal thing as he explored the part of him that holds part of the skrayling Erishen and his relationship with the Venetian guiser he hooks up with.

I'm not so invested in the 'love story' between Mal and Coby and the whole deal with her growing into her adult feminine self and losing much of her disguise as a boy.  At least it was because she wanted to and not because Mal wanted her to.

I don't know... I liked my read but it left me feeling vaguely dissatisfied. It won't stop me from reading the next one though.  This time, I'll try not to wait over 3 years to do it!  *LOL*