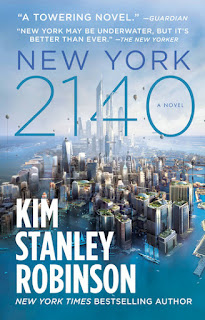 I made it almost halfway before throwing in the towel.

There is nothing happening in the first part of this book.  Nothing interesting at least - it's just a bunch of daily vignettes of what are actually very interesting characters when they're not being mired in unnecessary narrative over and over and over again.

This man obviously does not like to show.  He's a teller.  A big boring teller.  Treatises on finance and the 'stock market' in 2140, essays on real estate values after the flood, nonsense after nonsense.

I was very disappointed, but when I realised that I'd been working on this book for almost 2 weeks and wasn't enjoying much of it at all, well... it was time to give up.  I'd have liked to know more about the story of the girl with the airship who was flying polar bears from up north to Antarctica to preserve them. Sadly, I've not the patience to wade through the rest of the stuff.
Posted by Evaine at 1:00 PM