Death by Silver by Melissa Scott and Amy Griswold 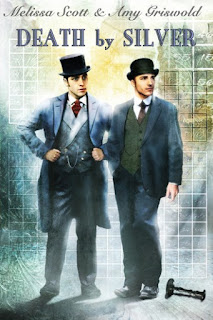 I had been wanting to read this for a very long time and I'm happy to say that it did not disappoint!  It's a murder mystery set in an alternate steampunk magic London, seasoned with enough magic to make things very interesting.  Frankly, I loved the world-building.

The two main characters, Ned Mathey and Julian Lynes have known each other since they were boys at school.  Their 'romance' is the secondary plot that twines a bit with the main mystery plot seeing as it's the father of one of their schoolboy 'enemies' who is the first murder victim.  I liked Ned and Julian a lot and I also liked the secondary characters that surround them, especially Ned's assistant, Miss Frost.  She is a surprising lady, that's for sure!  So, as I said, I liked them and was quite willing to follow them about as they solved the mystery and put some of their own ghosts of the past to rest.

I have the second book in my TBR and I will be reading it sooner than later and I hope that Melissa and Amy write more in this universe!
Posted by Evaine at 6:48 PM