How I Met Your Father by L.B. Gregg 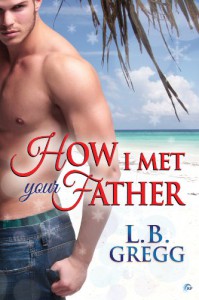 So, 'tis the season for holiday reads and How I Met Your Father is a charming, light-hearted, sexy and fun read.

The story of Justin, the closeted one-time boy band star and Jack, the sexy, doctor, father of the girl who is marrying Justin's best friend and bandmate has its deepish moments - for instance when a couple of the onetime bandmates explain to Justin exactly why he's wrong about many things - but for the most part its a comedy of errors that begins in turbulence and ends with a very cute HEA that's SO cliché that it works.

Had the author wished, I think this would have made a full novel and I could have done with a little more fleshing out of Jack's character - and by the way... 44 is NOWHERE near old. *LOL* He's pretty much too good to be true, but I know there's a flaw or two there to make him more interesting. And I thought the take on Justin staying in the closet because of all the people counting on him was intriguing too, and would have liked more insight into that. But then it wouldn't be a happy, fluffy Christmas story. :)

So brew yourself some coffee, tea or hot chocolate and curl up on the couch and give this a read. It's fun and left me smiling. :)
Posted by Evaine at 12:05 PM