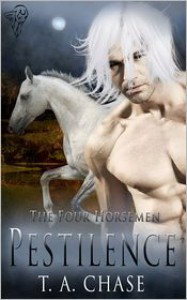 I finished this book on Christmas Eve and am just now offering up my review and rating.

I enjoyed it. It wasn't great, but it was a bunch of fun for me. I love the concept of the Four Horseman and how they supposedly act and interact in our world. The love story between Pestilence and Bart was intriguing and given time to form and grow. The quest for the cure to the disease that figured as a main plot point was okay, but I think I wanted/expected there to be more heft to it?

There were a few times when something would come up that seemed a little Deus ex machina, bits of information or backstory, along those lines, where you say to yourself, "Look at that coming out of the blue like that." Not a huge deal, but I figure if I noticed it enough that it brought me out of the story, then it was something that could have been fixed with a bit more focused editing maybe. The other thing that bothered me, but your mileage may vary, was that Pest seemed to talk in a very modern fashion, using slang and current turns of phrase and it didn't work for me. He didn't sound like a man from 1350ish and I expected him to. To make him sound a little different from Johnny Off The Street, you know?

But all in all, the premise is cool, the characters are well drawn for the most part, the love story works and the sex scenes are nice and hot. *g* And, I do want to read the rest of the series, War, Famine and Death.
Posted by Evaine at 1:02 PM