The Tomb by F. Paul Wilson 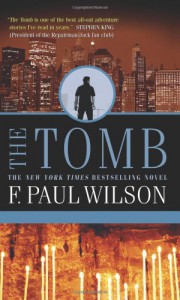 So a bunch of my buddies recommended the Repairman Jack novels to me and I finally decided to take the plunge. This was so not what I was expecting. *LOL* And that's not a bad thing, really! :)

So Repairman Jack is the guy that fixes things for a price. He lives off the radar, far off the radar and only his best friend Abe knows what he's really about. He's broken up with his girlfriend, Gia.. or should I say, she broke up with him when he confessed some of what he does to her. He misses Gia and her little girl Vicky very, very much. Vicky, by the way, is a Westphalen through her father, and either her grandfather or great-grandfather did something that set in motion a sequence of vengeance-filled events that are meant to culminate in her murder. And thereby hangs the tale

You know what this felt like? And Indiana Jones type adventure. :) There are monsters and rituals and myths and talismans and non-western gods... all the things that are necessary for a good pulpy horror-adventure. There are fires, explosions, guns, daggers, poisons and all kinds of things including eyes that glow in the dark.

Once I got past the first couple of chapters, I began to get more invested in the character of Jack and the book began to move along quite nicely. Was it 'scary'? Nope. Suspenseful? Some, yeah. Mystery? There is some, but to be honest, there were no surprises for me, I had sussed it all out from the beginning, but then again, maybe I'm supposed to. :) There were some flashes of humour that I quite enjoyed, especially concerning Jack's friend, Abe. Very, very quirky and I like him.

The ending? Well, it was a bit teeth-gnashing because I know there are more stories of Repairman Jack to come and it sort of leaves you suspended. But if I didn't know there were others? I'd be impressed by the almost ambiguous finality of it.

My friend, Ginette, wanted me to fall in love with Jack. I'm not there yet, but I did come to like him a helluva lot, especially in the final chapters. Will I read more? I most certainly will. It was a fun, Saturday afternoon matinee type of read and those are always enjoyable. :)