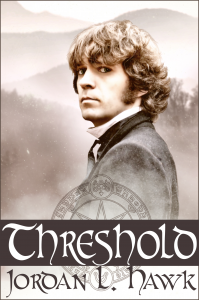 Threshold is the second book of the Whyborne and Griffin series and it sees our heroes travelling to the mining town of Threshold at the behest (sort of) of Whyborne's father. They take the indomitable Christine with them. Once at the town, we meet, among others, Elliot, an old friend of Griffin from his Pinkerton days who Whyborne eyes with a very jealous eye.

There are myths and monsters galore in this volume, along with some puzzling cave writings and missing people. There are also some wonderful intimate scenes between our heroes as well as some rather immature arguments. I realise that since the book is written from the first person POV of Whyborne, we are going to be seeing things his way... that is naive and emotionally immature, I guess, but I wasn't fond of the way both he and Griffin sometimes sounded like 12 year old girls. After the events of the first book of the series I would have thought them beyond some of it.

I wasn't thrilled with the choice of monsters. It came across as 1950's bad sci-fi/horror tropish to me. Plan 9 from Outer Space or something along those lines. *LOL* I did however, enjoy the climax of the book and the 'disposal' of the monsters. I loved how Whyborne came into his own, for a while at least, and took charge of things and I appreciated how he used his burgeoning power/spells to help. I did feel that Christine got better shrift in this novel than Griffin did, to be honest. The secrets that Elliot spilled about Griffin's past were intriguing and I would have hoped for more in depth about that, but I notice that the third book seems to delve into Griffin's family and past, so maybe I'll get that then. (I never read free chapters or excerpts, all I allow myself is the official blurb, so...)

So, all in all, I am very fond of these characters and while the plot of this book could have been better IMO, I still enjoyed my read.