Bound to be a Groom by Megan Mulry 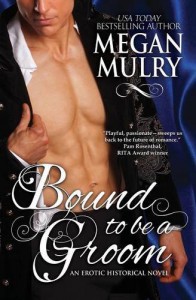 It was just all so convenient. Too convenient. While the characters showed promise at being interesting, it was a promise never truly fulfilled because... we need more erotic sex scenes! Whenever the characters would start to do something that had nothing to do with sex, it stopped pretty damned quickly so someone could have at least one orgasm. And they felt too modern to me, despite some pretty purple-ish dialogue. For instance, how does Anna go from a girl raised in a convent to a domme who makes no mistakes? When she's only had sex with her BFF and her husband?

Megan Mulry writes well. Her writing is easy to read and engaging (despite the outlandish at times dialogue) but I found myself wishing for some actual insight into the characters thoughts. Not just that things were hot and sexy and submissive and dominating, but WHY this appealed to them so much and how they managed to find it in themselves to open up to the others as quickly as they did. I also found myself wishing for something more to the story than just how the quartet comes together. Maybe it was that there were no real obstacles for any of them to overcome? (There were also a few spots, especially in the early chapters where POV switches - 3 in two paragraphs at one point, darned near gave me whiplash. )

Oh and... how do they know who the fathers of dem babies is? *g*