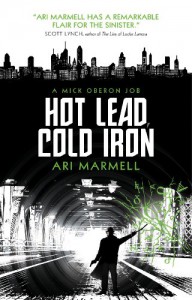 So a fae-based urban fantasy set in 1930's gangster Chicago. How cool is that? And I will say that the world-building was one of the reasons that I enjoyed this one.

Mick Oberon is a private eye and is also one of the aes sidhe - an elf, if you will, a very old elf in terms of actual existance. And it seems a very high-ranking one in the Seelie court once upon a time. He left that court - or was banished - it depends on which story you prefer and we really don't get a good idea why, but that's okay - this is a series of detective novels and it doesn't do to let all of the Mick's secrets out at once. It's not really necessary to the plot either. Knowing that Mick is not really welcome in the Seelie court any more is the important part.

So, hired by a mob wife to find her child who was kidnapped and replaced with a changeling child 16 years ago, Mick does his detectivating in the real world and the Otherworld in order to find out the truth and hopefully the child and bring her home.

As I said, the world-building was great; the characterizations of the characters, important and walk-on, well done; the plot cracked along quite nicely and was a lot of fun. Very film noirish, Dashiel Hammett (Sam Spade) or even John D. MacDonald (Travis McGee) - like there was also a feel of Jim Butcher's Dresden Files about this first of a series.

I have questions though. Questions about Mick and the how and why of him being a detective in 1930's Chicago. Questions that I'm certain will be answered as the series moves along and I can be patient for those answers.