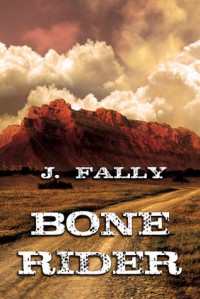 I LOVED THIS BOOK! Loved it so much I gave it 5 stars which is something I don't do easily these days, since I tightened up my ratings 'criteria'.

I bought this book on an impulse one night near the end of March, after seeing one of my favourite authors, Amy Lane, make a comment on Twitter about how one of the characters was her new book boyfriend and how she was enjoying the book. I am SO glad I followed that impulse!!

Bone Rider is set in contemporary time and is the story of a sentient alien armor system (who ends up naming himself McClane) and Riley the good-natured cowboy who's on the run from a failed relationship with Misha, a Russian mobster hitman. We also meet Misha's best friend, Andrej. His good friend J.C.. Misha's employee/friend Kolya and of course Misha's sister, Maryia. And the military folks including the doctor and the general and the president. All these characters, every last one of them, works for me.

Bone Rider was like a movie on the page. I was hooked from the beginning and could not put it down. The action was fast-paced and the battle scenes, for once, were clear and easy to follow. There were lots of periods of introspection by the characters, especially Riley and Misha, but they didn't feel like info dumps at all - they were perfect insights into the characters and served to move the story forward. There were sex scenes and each and every one of them were integral to the story. Bone Rider is an excellent example of how to write hot, steamy, fun, heartbreaking, intimate sex scenes and make them matter.

Bone Rider is funny too. I laughed out loud so many times, especially with McClane learning the ropes and Riley's reactions to him. And then the camaraderie of the 3 Russians - Misha, Andrej and Kolya - a bunch of smartasses at times and I loved it.

Now I've been pretty immersed in the world of m/m for the past couple of years and when Bone Rider came out back in October/November of 2013 I don't remember much of a buzz at all. I have NO idea why. This book would DEFINITELY appeal to the legions of fans of Abigail Roux and SE Jakes. Is it because it's marketed/catagorised as a Science Fiction/Western? Because really, it's more of an Adventure with futuristic elements. Okay, what's the difference between that an Sci-Fi? Well... McClane, even though he is an alien AI armour system is an actual full-fleshed character as opposed to a piece of futuristic weaponry. The whole book just doesn't have a sci-fi feel to it at all. As far as it being a western.... well, Riley is considered a cowboy, but a modern day cowboy and there are NO horses involved at all - except maybe under the hood of Riley's truck or Kolya's muscle car. So I really think it was, and continues to be erroneously marketed.

Anyway... you like Abi Roux and SE Jakes? You like action/adventure? You like fast-paced novels with great characters, wonderful relationships and fun dialogue? READ THIS BOOK!! I don't give my 5 stars easily, but with Bone Rider, it was a no-brainer!