A Forbidden Rumspringa by Keira Andrews 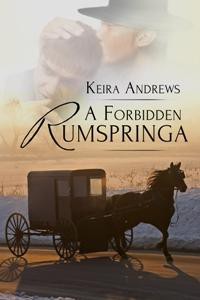 I picked this book up because Heidi Cullinan totally lost her shit over it on Twitter the other day. I don't think I've ever heard Heidi gush so much about a book, so of course, being as she's my hero, I had to pick it up.

And I wasn't disappointed. A Forbidden Rumspringa is a beautifully written story about two young Amish gay men and how they fall in love and the tragedies and doubts that haunt their time together. It's not an inspirational story in the genre meaning of the word. Yes, the Amish angle is very, very important to the story, and the author does a wonderful job of being respectful and truthful about the religion and culture and how difficult, nigh on impossible it would be for two young men such as Isaac and David to even admit their feelings to each other, never mind to their families and friends and the general public.

I had a few quibbles with the story. For instance, David seemed to have experience in sexual matters that I don't think would have come from magazines, books or movies and when juxtaposed with Isaac's total ignorance on the matter it was a bit jarring. The sex scenes were very intense and hot, though, don't get me wrong. :) Another thing that bothered me was that David ended up seeming to me to be a bit of a wishy-washy user - which sounds more harsh than I mean it, probably, but if I'm honest, the last couple of chapters cooled me on him.

And then there is the matter of the cliffhanger ending. I think it needed more of a lead up, maybe. Although the story is told from Isaac's POV, I think I found David's abrupt about-face at the end too convenient and wanted more of the why behind it. And then there was the metaphor of the train that ran through the book but was never really exploited come the final chapter, sadly.

So while I'm not as OMG OMG OMG as Heidi was, I did really enjoy the book for the most part - enough to give it 4 stars - but for my taste there were a few things that could have been done differently. :)