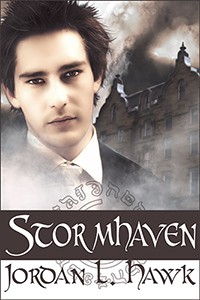 This third installment of the Whyborne & Griffin series continues the love story and paranormal adventures of our stalwart heroes.

I enjoyed this one more than the previous novel. A big part of that was my preference for the undersea menace as opposed to the um... outer space monsters of Threshold, as well as for the whole paranormal side of the plot associated with the 'baddie'. I enjoyed the suspense part of the book a lot. I might have wished for a little more detail and explanation, but that's not really the nature of this series, and that's okay. (Although I could have used more resolution with Kerr, Griffin's father, after what happened at the asylum.)

We also get to meet Griffin's family and learn a little more of his background. He is hiding his relationship with Whyborne from them and leading them to think that he's been cured of his 'unnatural predilections'. And we know how well THAT always goes. :) I found myself giving Christine many internal "Atta girl! You tell him!"s thoughout the story. And while I'm at it, I'd have like to have seen more of her because she's very much a favourite, but I do recognise that W&G are the main characters here. *LOL*

But while I love the boys and all their flaws and quirks, there were times that I found both of them rather whiny and clueless about their relationship. Didn't they learn anything from the previous two books? I mean, I get that Whyborne is insecure about the relationship and the depth of Griffin's feelings for him, but JEEZ, it's like he hasn't grown at all at times. (And that's a big reason why I didn't give Stormhaven 4 stars.) And if Griffin was any more unaware of what was going on with the people closest to him I'd have to accuse him of being a belly-button gazer.

I do hope that the huge strides Whyborne and Griffin have made in their relationship will stick into the next book and beyond. The moments where they FINALLY realise how deep and lasting their feelings for each other are among my most favorite in the book.

In closing, Stormhaven is not without it's problems, in my opinion, but it is a fun and satisfying read and I will definitely be continuing the journey with Whyborne, Griffin, Christine et al. :)