A King Undone by Cooper Davis 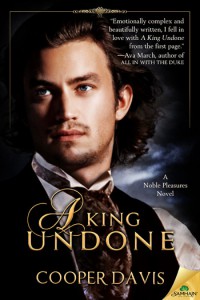 One of my favourite m/m historical authors, KJ Charles mentioned reading this book and had many nice things to say about it. Off I went and bought it.

The world in which our heroes, Arend and Julian, live, is a world where men may openly court and marry men. That's all well and good, but we find that there are still questions of lineage, heirs and royal duty. So when the widowed King Arend finally seeks out and contracts a male concubine long after the death of his queen, one would think that things would go smoothly. He's done his bit for the kingdom and produced an heir with his late non-lamented wife but oops... the prince is all about the men too. Anyway, King Arend contracts with the Temple Sapphor and gains the gorgeous Julian as his concubine for a year.

I loved this story. And funny, I didn't think I would at first. The voice of the author, Cooper Davis, is sort of different. Sort of .... let me tilt my head until I figure what I'm hearing wrong. Once I got used to it, once I realised that this is actually how the residents of this alternate Victorian world think and speak, things got a whole lot better. I still found myself brought up a few times by the constant use of the term male instead of man and thinking why can't he just be a man for heaven's sake! But that's how these folk think of men... I think... as males. I dunno, it's weird, but for the most part it works.

The other thing that sort of set my teeth on edge was what I felt was a feminisation of the concubine, Julian. Julian described as quite gorgeous, quite beautiful, big and manly but with a feminine voice... I'm going to be honest, I spent some time wondering if Julian was suddenly going to turn out to be trans because these things were mentioned somewhat regularly. I understand that Julian's voice is unique and different and I assume... high? I found it puzzling, but maybe that's just me.

And then there's the end. Talk about ABRUPT! It's not really a cliffhanger in the sense that no one is dangling off the edge of said cliff, but there are SO many questions unanswered and the tale of Arend and Julian is really just beginning. I actually double checked to see if I had skipped a chapter or something! *LOL*

One of the things on the big plus side is the angst and the UST. OH MY GOD! It steams right off the page/screen. The intimate scenes are SO intimate and sensual and sexy. And the dialogue... OMG, there is some terrific banter all throughout the book. (And yes, I've already begun pairing up a couple of the secondary characters.).

Those are the things that didn't let me give this book 5 stars, but I'll tell ya... I'm all over the next one in the series!