According to Hoyle by Abigail Roux 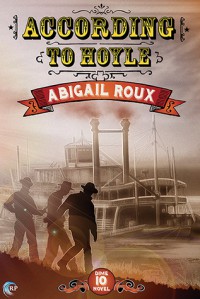 This was a reread of According to Hoyle, the re-issue that just came out this week from Riptide.

According to Hoyle has always been my favourite of all of Abigail Roux's work. Neither Ty and Zane from Cut & Run, or the Sidewinder boys have ANYTHING on Cage and Gabriel or even Wash and Flynn.

This is a thick, juicy story that pays as much, if not more, attention to the actual caper story than any sexytimes. The growth of the relationships between the MCs are shown in full force, but the actual sex scenes are few and far between. Which is JUST FINE! A wealth of emotion and meaning can be shown via a simple gesture or a turn of phrase and Abi does it SO well in this book.

My usual *SIGH* is in place, however, as most of the featured men are large in stature - I think Gabriel is probably a favourite because he's not a freakin' behemoth! *LOL* And I will admit that even though Cage is written as being a big fellow (think Hemsworth), I see him more as a Tom Mison (Ichabod in Sleepy Hollow) type. Mind's eye, it's a funny thing.

Anyway, I loved this book again and probably even more than before. I think it's Abi's best work, her best characters, her best writing and her best... everything. *LOL* A very good way to start off my 2015 reading. :)
Posted by Evaine at 12:37 PM