The Name of the Wind by Patrick Rothfuss 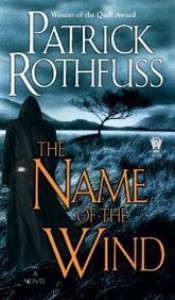 This is a book recommended to me, first by my son's friend and then once my son had read it, by my son. :)

It's very readable, very good, different enough to satisfy this jaded fantasy reader and it's really a lot of fun for the most part. The main character, Kvothe is fascinating as an adult, now an innkeeper in a little backwater town, we get to know him, sort of, in quick glimpses as he tells his life story to a character who likes to be called Chronicler. We also get to know him at this time through the eyes of his 'student', Bast. Bast is of the Fae... I think. :) There are a lot of unanswered questions throughout this book.

The Name of the Wind is really the story the boy Kvothe and how he began to become the man we now see living the quiet life as an innkeeper. There is magic, music, creatures of the dark, war, death, murder and mayhem. There is also humour, affection, fun, more music, friendship and laughter. Kvothe has all kinds of adventures beginning with his very early years spent as a member of his parents' travelling bardic/theatre troupe on through his first couple of years at the University. He makes friends, enemies, patrons and protectors.

The only thing that bothered me was the part of the narrative having to do with the elusive Denna, the girl that Kvothe meets first on the road once he's on his own. There had better be a payoff for all the page-time devoted to her, especially their big northern adventure, because frankly, I felt it was taking away from the interesting story of Kvothe learning and growing. It was truly the only part of the book where my mind began to wander.

So, all in all, a really, really good read and I will soon be getting the second book to see what Kvothe gets up to next!