The Shadow Revolution by Clay Griffith and Susan Griffith 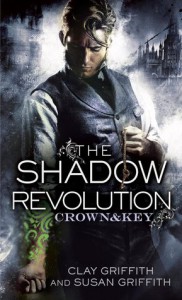 I had such high hopes for this book. It sounded so good but sometimes what sounds good is not what one actually gets.

The characters are interesting on the surface, but we seldom, if ever, get below the surface to find out what really makes them tick, what motivates them, what elevates them above the clichéd norm. I'm big on characters, so this was a huge disappointment for me.

The plot was good, werewolves invading London to put it simply. Oh, and a mad doctor creating an army of homunculus monsters. There were tons of in-depth fight scenes and honestly, they were the best written things in the book. But the overall execution I felt was lacking...

Which brings me to the writing. The book has been edited, the authors thank the Del Rey editors in their notes. But my God, it was edited badly. Sentences in the middle of a paragraph that have nothing to do with the sentences before them or after them. IN THE SAME PARAGRAPH! Jerky narrative, stilted dialogue, flowery writing that was just not good. I found the actual reading to be unpleasant much of the time. Of course, your mileage may vary, but I believe that had this book had a good, intense and knowledgeable, content/developmental edit it could have been a TERRIFIC book.

This is the first novel of a trilogy, the Crown & Key trilogy and you know what? Despite the questions left dangling at the end, I really am not inclined to run out and purchase the next two. The Shadow Revolution was that disappointing.

(Looking for something in the same vein as this book? Lilith Saintcrow does it better, IMO. Check out her Bannon & Clare books.)