Extraordinary People by Peter May 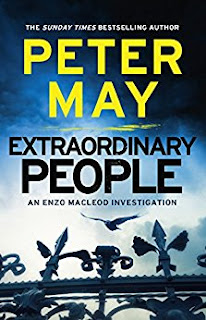 A good friend recommended Peter May to me when I was looking for mystery writers to add to my 'to read' list.  I picked up a couple and this is the one I decided to read first. Out of all of his books, I picked this one because I liked the idea of a Scots-Italian hero in his early 50s with a pony tail.  *LOL*  Seriously!  Enzo Macleod.

I enjoyed the book for the most part.  I'm not totally enamoured of the afore-mentioned Enzo, but I suspect he will grow on me.  I honestly didn't like him at first, but by the end of the book he had improved muchly in my eyes.  :)  He has issues and he's a bit of a misogynist.  He - or maybe it's just the author - has a fixation on boobs.  If I had to hear about his student/assistant's bouncy bosom one more time, I think I'd have screamed.  *LOL*   There is also a subplot concerning his two daughters - half sisters - that I found interesting and I hope it continues on in the series.  Pretty sure that it will.

The mystery itself, the years past disappearance turned into years past murder of a brilliant French teacher at one of France's elite centres of higher education, wasn't that twisty turny, but it did keep me guessing until nearly the end.  I liked that it was much of a puzzle and involved a lot of give and take between Enzo and the secondary cast in brainstorming sessions.

There was a lot of description going on - scene setting and location picturing - and I've come to think that this might be a hallmark of Brit-authored police procedurals/suspense novels.  It might turn some folk off, but it sure gave me a detailed mind-image of many of the mystery's locations throughout France.

There were a couple of threads I thought were left dangling, but maybe they'll get picked up in the next Enzo File - or maybe they really are just coincidences, indicated a rising level of Enzo's paranoia as the story went on.  To be determined, as they say!

So, while not perfect, Extraordinary People was quite enjoyable and I'll indeed read more.  :)
Posted by Evaine at 7:01 PM