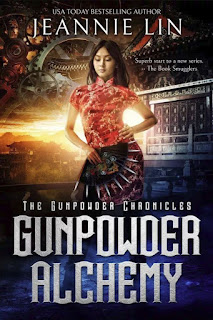 This book had been unavailable for a good while (rights reverting to author etc...) but at last it's been republished by the author.  And it's good!  Worth the wait.  :)  I'm pretty sure I was guided to this by something one of my fave authors, KJ Charles said on Twitter, so thank you KJ!

What we have is ... I guess it's best termed as a steampunk adventure, set in the mid-1800's in the midst of The Opium War, with a lovely undercurrent of romance.

Soling is the heroine and while she's young - 18 years old - she's not annoyingly young.  The daughter of a brilliant engineer executed by the emperor when she was but a child, she's had a hard and hardscrabble life over the past eight years.  She takes care of her opium-addicted mother and her younger brother and is a very smart cookie in her own right.  She heads from her small village into the city to sell the last keepsake she has of her beloved father to feed her family and the adventure begins.

She meets a bunch of different people from her and her father's past. Men that worked with her father.  The man she was once betrothed to.  The Crown Prince too.  And not only are there the devil English foreigners, there's an army of rebels to contend with.  And through it all, she refuses to panic, refuses to give in to her fears, refuses to give up on getting back to her family and getting them to safety.  The girl has gumption, dammit! *LOL*   And she has flaws as well which makes her likable and not obnoxious.

And there is some romance.  There's a spark between Soling and one of her father's protegés as well as tons of chemistry between her and he one-time betrothed.  In fact, there's a scene between the two of them where he's measuring her foot for a mechanical boot type thing that is SO damned sexy while being so simple.  AMAZING!

I had one small problem while reading and that was that in my epub copy, Chapter 29 ended up as being Chapter 31.  So things that were referenced in the following two chapters I hadn't read yet!  Most annoying, but shit happens.

Anyway... great book!  VERY enjoyable and I will be looking forward to the next part of Soling's adventure!