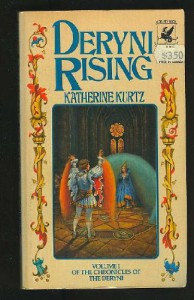 Well... this is a toughie. I spoke about Benjamin January in previous posts. There's Silk from the David Edding's Belgariad series. John Clark from the Tom Clancy novels. F'nor from Anne McCaffrey's dragon books. Athos from Dumas' The Three Musketeers and later books. Michael Geste from Beau Geste and sequels. Rhys Thuryn and Joram MacRorie from the Camber books by Katherine Kurtz. Mikhail Vasilyovitch Bayul from Amy Lane's Promise series (and yes, I must use his FULL name.). Tyrion Lannister from George R.R. Martin's Song of Ice and Fire series.

I guess my favourite, after all these years, rereads, books under the bridge and all, would be Alaric Anthony Morgan, Earl of Culdi, from Katherine Kurtz's Deryni series. I fell in love with him when I was a teenager and at 56, I'm still in love with him. :)
Posted by Evaine at 11:03 AM