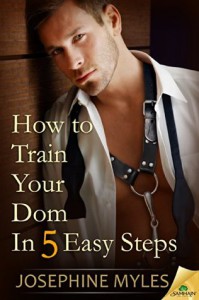 Most of the time, it's the all-knowing Dominant and the young (usually), exploring submissive he takes under his wing. The sub is usually confused, coming to terms with what he likes, worried about giving up control and every other uncertainty you can imagine. And the wise Dom shows him the way, breaking the hard, world-weary shell around his own emotions at the same time.

Not this time! Jeff is the Dom and he's new to kink, hell, he's new to gay! After breaking up with his long time girlfriend - long time being 14 or so years, he's all about exploring the things Sarah would never allow - except he's not very skilled at it. Enter Eddie, experienced, gay, good-natured, happy sub, totally willing to show Jeff the ropes because he finds Jeff just that hot. :) Which would be all well and good except that Jeff doesn't like boys. :)

And thereby hangs the tale. :)

Jo, as always, writes with her lovely British voice. These are real people, who do real jobs, and have real families and if their love affair is a little shiny and sparkly, I didn't care at all. I loved how both the physical side of their relationship bloomed as their emotions grew. And it wasn't all about the Hawt Sex, Jeff and Eddie found things to talk about, moments to share out of the bedroom and were just totally charming together.

I really appreciated how the kink was written so matter-of-factly - sometimes it comes across as very um... titillating and voyeuristic - and not in a good way. Not here. Jeff's glee at being allowed to do all sorts of things to Eddie and have Eddie love them all, well, it was a lot of fun as well as being steamy hot. I don't get the attraction for having my partner trussed up like a Christmas turkey, but Jeff certainly liked it and THAT made it very hot.

Funny thing... I discovered a personal squick in reading this book. I don't enjoy it when a Dom calls his sub, "bitch". Maybe it was the frequent use by Jeff in this book? I don't know, but I did find it bugging me by about halfway through and even said as much to a close friend I was talking to online in between chapters. But that's a very personal thing.