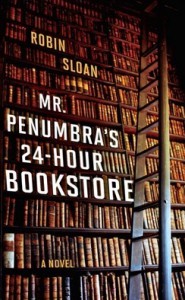 This was an odd book, I must say. I didn't feel as if it got going much before the last third. The first two thirds were basically set up for us to get to know the characters and all their 21st century quirks. I kept wanting something... anything to happen. Anything other than more puzzlement. I think this was a book that was trying to hard to be clever, maybe.

To quote Blair on GR (whose description I thought was excellent and right on):

It's a mystery/adventure set in San Francisco, revolving around an out-of-work marketeer and web designer who takes a job as a clerk at the odd little bookshop of the title. He soon realises that there is more to Mr. Penumbra's than meets the eye, and together with a group of his friends, he embarks on a mission to get to the bottom of the shop's real purpose. What follows is a fantastical series of events involving an international secret society and almost impossibly complex codes hidden inside a series of books. It's a collision of ancient mystery and very modern, internet-savvy characters.


Except none of that really starts until the last third of the story. I loved the ideas and I really liked most of the characters that the author created, but something never quite gelled for me. There are some great passages like the following:

“So I guess you could say Neel owes me a few favors, except that so many favors have passed between us now that they are no longer distinguishable as individual acts, just a bright haze of loyalty. Our friendship is a nebula.”


So while I wasn't as enthralled and OMG as I had thought I'd be, I did enjoy the read for the most part. The juxtaposition of books vs the internet/technology gave rise to some humourous and thoughtful insights and the important thing to take away from all this is an imperative READ!

(NB: I paused in the reading of this book so I could read Kingdom of Scars.)