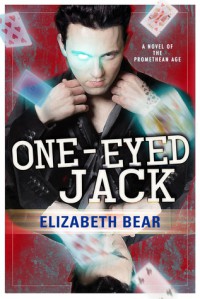 A Novel of the Promethean Age

I love Elizabeth Bear's work. I love how she layers sentences into paragraphs. I love her way with dialogue. I love the atmosphere with which she imbues her stories. For anyone looking for a juicy read in the fantasy, urban fantasy, mythology turned on its ear she would be one of the first authors I would recommend.

That being said, when she writes in her Promethean Age universe, I always end up feeling as if I've missed something vital in the tale. The "Ahhh... THAT'S what's going on," moment. It's like wine, okay? See... I like wine. I like to think that I can tell the difference between a lousy bottle and a good bottle. But the thing is, once we get into the Really Good Stuff, I don't taste the difference from the good stuff. It's like I have a plateau. *LOL* And that's how I feel about Elizabeth's Promethean Age books. (For the record, I don't get this feeling with her other worlds/universes.)

One-Eyed Jack is really a fun read though, don't get me wrong. Media ghosts... I love it.. media ghosts from early 60's TV join up with American legends and there's a battle over who is going to control, be the genii, the caretaker of Las Vegas and Los Angeles. I think. See this is where it gets... foggy for me. Is there magic? There is to an extent, I'm pretty sure, but the weapon of choice is a selection of guns and the abilities of a pair of the American Legends. But see... I don't really understand or 'grok' the stakes - what will happen to the cities if group A wins... what if group B wins... what if there are no winners? Maybe I need more backstory? I don't really know, but I do know that I'm not as clever as Elizabeth thinks I am.

But still.. imagine how good it is if I still enjoyed the book while feeling as if I just wasn't clever enough to get the whole picture. :)
Posted by Evaine at 12:16 PM