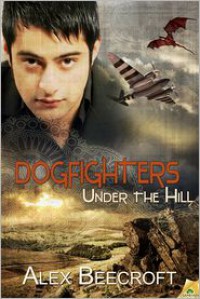 This is the sequel - the DIRECT sequel - to Bomber's Moon. When I say direct, I mean it picks up in the next actual minute where Bomber's Moon ended. Seriously, it all should have been one single book, one juicy volume and you know... with some more judicious editing, in my opinion.

I love Alex Beecroft's work, but this novel and its predecessor were confusing. I don't think I ever felt really comfortable and clear on what was actually going on. The writing was gorgeous, but I think that maybe it only served to render the actual plot, the actual action difficult to digest. That's why I say that some judicious editing might have been a benefit.

When I began the first book, I was thinking that I was going to get the story of the Paranormal Defence Agency, but while they were fairly prominent in the first volume, we barely saw them in the second. We went from a sort of urban fantasy tale with historical overtones to a high fantasy that included different cultures and mythologies. Honestly? I'd have liked more of the PDA.

I did enjoy the fact that what I think was the Hindu mythology played a big part of the story. It's quite possible that this only added to my confusion since I'm pretty unfamiliar with the ins and outs of Hinduism. Maybe a bit of down to earth, bare bones explanation would have helped me there.

So all in all, this was a decent read, not spectacular and I think it could have been better. Oh, and the covers? (Covers are a big deal for me.) I thought the covers would have been much better without the huge headshots of the men. I know it's a publishing house standard look but damn... so many of them bug me. Yeah, I'm judgy. *LOL*