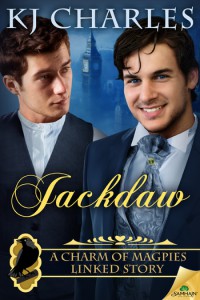 Jackdaw is set in the world of Charm of Magpies and features Jonah Pastern, who we met in Book 3, Flight of Magpies. Jonah is a windwalker and a thief. Once, he was the lover of Ben Spenser, a police officer. Then came betrayal, secrets and laws that could not be contravened.

To me, this book is a little darker than Stephen's and Lucien's tales. Ben is in a very bad place during the first half of the book and things look rather hopeless. Even Stephen in his supporting role seemed harsh and unlikable. It was also a smaller story - in scope, I mean. There were no otherworldly creatures to battle, no magical baddies out for murder and mayhem. It's the story of two men, one who feels totally broken and done, the other who feels as if he was never worth anything and never could be and how they manage to get past that and create something sweet and beautiful. And despite the harshness and violence at the beginning of the book, I found this story to be almost gentle and cosy in nature at times.

I loved the character of Jonah. The people of the village in Cornwall call him a bucca and he's really exactly that. So full of life, living on his emotions, a huge heart and he takes pleasure in so many of the simpler things. I think he may be one of my favourite characters of all KJ's creations. He's tied with Lucien at the very least. :)

And yes, Lucien makes an appearance and it is WONDERFUL!

Yes, I loved this book and I don't know if we'll see more of Jonah and Ben or if we'll ever see more tales in this universe even, but I certainly hope so.

Email ThisBlogThis!Share to TwitterShare to FacebookShare to Pinterest
Labels: A Charm of Magpies, Fantasy, KJ Charles