The Alchemist of Souls by Anne Lyle 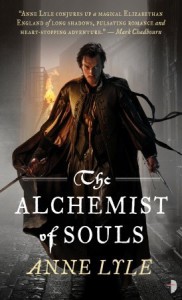 The Alchemist of Souls is the first book in the Night's Masque trilogy and was a total guts buy for me. Both this book and the second in the trilogy, The Merchant of Dreams, were part of the a Kindle daily deal, each for $1.99. I had never heard of them, nor had I heard any buzz about them and the author, Anne Lyle was a complete unknown. I bought them for 3 reasons - the blurbs described something a little different from the norm, the price was right and the books were not self-pubbed. I know that last sounds unfair, but there's just too much self-pubbed crap out there for me to go into totally blind. So, that being said...

I really enjoyed it!

The setting is one that I've not seen a lot of in fantasy, so it felt fresh and new. It also felt familiar due to it being an alternate history of a time of which I've read a lot. There aren't a ton of differences, but those that are different are interestingly so... Queen Elizabeth marrying Robert Dudley and having two sons, for instance.

The characters are interesting. Mal, Sandy, Coby, Ned, Gabriel, Kiiren and the nobles, spies, actors and merchants and I enjoyed reading about them. My only iffy feelings came from the scenes with Coby where I felt the book veered an awful lot into YA territory which is not something I seek out. There was the glimmering of a romance between her and Mal, but it really wasn't important to the story of Mal, Kiiren, the plot against the skraylings and the various court intrigues. It felt a tad contrived and I thought the relationship worked better when Mal and Coby were just being friends and allies. I really hope THAT story doesn't take over the next book in the series.

All in all, I'm pretty stoked to have found another new fantasy series that I can enjoy, one that's different from stuff I've read before, and one that's kept me invested and engaged.