Murder at the Britghtwell by Ashley Weaver 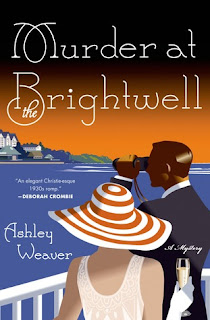 The reason I bought this was because of the cover. :) Is it not gorgeous? It caught my eye immediately and since the blurb sounded rather interesting, I had to have it.

It's touted as a Christie-esque mystery and I guess it's so, because it concerns a group of people brought together in a confined situation where any of them could be the murderer. Set at a classy seaside resort in 1930s England, it's got plenty of atmosphere and numerous red herrings to the point where I was honestly never certain who the murderer could have been until near the end.

Amory Ames is a woman of her time and circumstance, I think. Looked upon with today's eyes, I can see how some might find her a bit.. unassuming... but honestly, we are reading about the 1930s high society in Britain, okay? She works. I liked her.

And I liked her husband Milo, despite his being an absolute jerk more than once. I think there's much more to him beneath that smooth and suave exterior and hopefully we find out more about him over the other books.

Anyway, I much enjoyed it and once the price comes down on the others (there are 2 of them and they're $12.99 each for the ebook - too steep for me!) I shall pick them up. :)