The Unsung Hero by Suzanne Brockmann 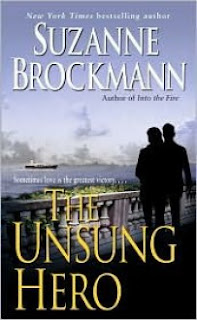 So this is Troubleshooters Book 1 and the blurb seemed to hit all my happy buttons, but man oh man, talk about the execution not living up to the premise.

Both of the main characters are really dumb about their interactions. I mean... REALLY EFFING DUMB. Had they paused to actually talk about a few things, few misconceptions, like most people in their mid-thirties might, I might have bought their conflict more, but as it was, I spent a good part of the book wanting to throttle them.

The parts of the book that were about them, that is. A good part of the novel is taken up by flashbacks to WW 2 and the story of the hero's uncle and the heroine's father and the woman they both loved. Honestly? If she'd wanted to write about them, she could have actually written a prequel - and maybe it's me, but I didn't really see what that whole story had to do with the love story between Tom and Kelly.

I don't know, I felt like the author was trying to tell too many stories at one time, hopefully finding a way to link them all together via theme? If so, I was too stupid to get the theme, I guess. I just found it tiresome.

It's too bad because I thought the basic international terrorist and the gang of misfits trying to stop him was a great story that somehow got really short shrift with all the other crap going on.