The Spare by Carolyn Jewel 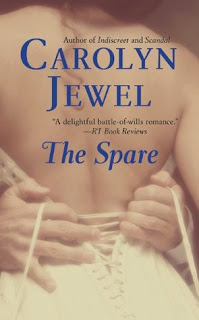 This book was recced to me by a fellow romance reader on Twitter and while I can't say it was the best recommendation I've ever received, it was certainly a decent rec.

I enjoyed the book even though I didn't much like most of the characters. That's odd for me because I'm pretty much a character driven reader. I'll forgive a ton of stuff if I love the characters. But these two MCs, Sebastian and Olivia... damn... I struggled with them. But I kept reading, and enjoying my read. *LOL* I dunno.. go figure.

I found the writing a little disjointed at times, had a feeling I'd missed some vital scene or explanation or something along those lines. And the climax of the book... well... it felt as if it was missing something, that it wasn't as monumental as it felt like it should have been. There were tantalising little details that were dropped - like the red-headed guy in the picture of the long-ago earl - that I didn't feel were picked up on. But I have to say that the connection between Sebastian and Olivia felt right, even when I wanted to know more about the whys and hows etc...

So while I had a lot of hmmms or raised eyebrows about the book... I honestly ended up enjoying my read. And am pleased that I have 2 more of Carolyn Jewel's books to read. Oh... and I don't think this is a series! YAY!!!! (It's a rare thing in romance these days)