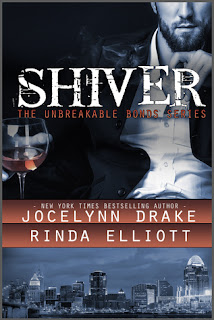 This book was a round-about rec in a way. One of the romantic suspense novelists I follow on Twitter was quoted on a book blog about some of her fave reads and the 3rd book in this series was one of the ones she mentioned. So, I went to check out the series and it hit a lot of my 'ooooh' buttons, so I went and picked up this first book.

There are 4 men who are as close, if not closer, than brothers. A millionaire club owner/businessman, a surgeon, a security company head and a chef. This story is about the millionaire and what happens when he gets targeted by the bad guys over his latest property venture. His buddy, the security company guy, sends him a bodyguard and the romance begins. :)

It worked for me for the most part. I enjoy the whole band of brothers thing and all the characters are bigger than life, which is fun for me. It could be compared, I guess, to the Abi Roux Cut & Run books or SE Jakes' Tommy & Prophet series, but it's got a bit to go to live up to those faves of mine.

The romance and sex is steamy hot and the falling in love stuff makes sense for the most part. Although I did find that maybe, in certain tense situations, maybe the guys could have held off on the whoopee for a little bit?

However... I did knock down my rating because this pair of authors, like many in the m/m genre, use the word SMIRK so often and think it's a hot and sexy expression. OH. MY. GOD! It's SO not. It's smarmy and supercilious and obnoxious and it turns me right off and hauls me out of the story quickerthanthis. UGH, I hate it. In my uneducated opinion, I they use it in the hopes of it coming across as uber masculine. Anyway, if I were the editor, I'd be raising hell.

So, I will be adding the others to the TBR pile and hope that the word is used much, much less.