You Had Me At Christmas - Various Authors 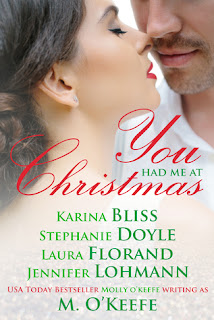 You Had Me At Christmas is an anthology of 5 Christmas romance novellas.

The first one is Play by Karina Bliss and you know what?  I couldn't put it down!  *LOL*  I love me a good rock star story and this one was one.  But mostly told from the rock star wife's POV.  Yup, story about a married couple with two little kids.  He's a fresh made rockstar and she's his childhood sweetheart learning to cope with his newfound fame.

I found both characters believable and their insecurities and doubts worked for me.  As did their reconnection - especially the parts with their kids.  The sexy scenes were sexy and steamy, but it was the scenes where they were dealing with their kids and their rekindled desires at the same time that I really enjoyed.

Now, on to the next one!

One Naughty Little Christmas was a lot of fun!  Starts off with a dating app and some sexy sexting between a business woman and an ex con on Christmas Day night, neither of them in the first blush of youth (Thank God!).  I found it an interesting pairing and their back and forth texting and sexting at the beginning of the story was well done and easy to follow.  I don't know that there was a lot of holiday in this one, other than the setting and the set up, but it left me with a smile on my face, so all was good!  :)

Twelve Kisses Until Christmas was ... well.. not my cup of tea.  Each time that I began to really enjoy the characters, they pulled some whiny bullcrap that made me go UGH.  It was really very much a New Adult type story and those I avoid like the plague.  The characters are never likable or sympathetic or not whining about something.  I think maybe the premise might have been better served with an actual novel where the characters could have been better fleshed out and maybe some positive sides shown?  Not much of Christmas or the holidays in this one either.  Anyway... the story wasn't great.

Snow-Kissed.  Well.  The first chapter left me so down and in despair that when the second chapter started the exact same way, it was fast forward time.  I want to read holiday stories that don't throw me into a pit of dark despair before maybe... MAYBE giving me my HEA or HFN ending.  I know miscarriages are devastating and tragic, but maybe not in a holiday romance novel?  Seeing as I DNFed this story, I have no idea if it actually held up the Christmas part of the bargain.

Let's hope the last one leaves me in a better frame of mind.

Christmas Eve: A Love Story.  It was an improvement, I'll give it that.  (Honestly, couldn't have been much worse than the DNF story.) I dunno. I wanted more joy, more happiness, more Christmassy feeling.  I wanted to finish the story with a smile and a happy sigh, but that didn't happen.  I think it could have.  The story of long-time friends to lovers is always an enjoyable trope for me, but this one was so - angst-laden? - that I found it hard to enjoy.  It was missing a sense of fun.

So, out of five novellas, I can honestly say that I enjoyed 2 of them.  Way too much 'woe is me' in the others.